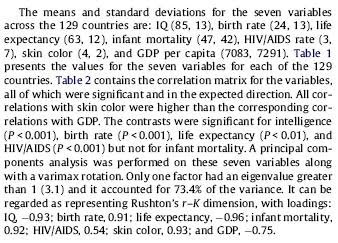 I've copied the correlation table and the results from a 2008 study in Personality and Individual Differences (Templer, Donald. 45, 440-444). From the author's conclusion:

The finding that skin color shows substantial correlations with life expectancy, birth rate, and infant mortality confirms the importance of this variable, as originally identified by Templer and Arikawa (2006). It merits further research given the suggestion made by Jensen (2006) that pleiotropy(genes having more than one effect) may underlie both IQ and skin color. Skin color and IQ have been found to be correlated in several studies of people of mixed-race ancestry Jensen, 1998; Rushton, 2008; Rushton & Jensen,2005).

The nature of a latent common factor such as the r–K dimension requires inference and interpretation. Life history theory provides a central organizing theoretical principle for generating specific predictions as to which traits should be correlated and it suggests physiological processes such as brain functioning that provide a substrate (Jensen, 1998; Rushton, 2004). This latter approach was adopted by Figueredo et al. (2006) who proposed an integration that traced the development of a life history from genes to brain to the various associated components of the reproductive strategy. They explored the psychometrics and behavioral genetics of the K factor, and specific areas of the human brain, including the frontal lobes, amygdala, and hippocampus. They then applied life history theory to predict patterns of development within the brain that are either paedomorphic (i.e., development begins later, proceeds at a slower rate, and has an earlier cessation) or peramorphic (i.e., development begins early, proceeds at a faster rate, and has a later cessation). The theory of r–K reproductive strategies may eventually provide an evolutionary understanding of many seemingly disparate results in personality research.