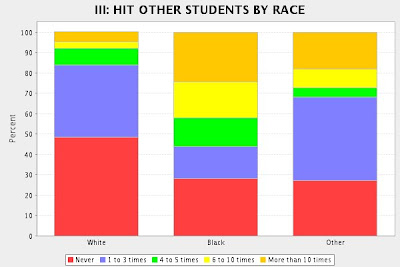 Race, crime, and getting high: The Longitudinal Study of Violence Against Women asked 455 male college students about criminal activities and drug use. Illegal acts ranged from minor items like lying about one's age to more serious crimes like attacking students or carrying weapons. I was interested by the racial pattern:

According to conventional wisdom, the only reason why blacks have higher rates of crime is because many are from the lower class. (Many people where I work assume that criminal justice system bias produces the disparity. The self-report data presented here show these guys are full of it.) The social status of black and white students at the same college is similar, but black criminality is half a standard deviation higher.

To be more specific, look at the graph to see the huge difference on the question of hitting other students in the last year.


Mean alcohol and marijuana use index

By contrast, you can see that white college students drink and smoke pot more than their black counterparts. The difference is a little less than one-half of a standard deviation. The stereotype of the drunk frat boy is confirmed.
at February 21, 2009
Email ThisBlogThis!Share to TwitterShare to FacebookShare to Pinterest
Labels: crime, Drug Use, Race