We know that smart people tend to have fewer kids, but do they also say that smaller families are best?

General Social Survey participants were asked, "What do you think is the ideal number of children for a family to have?" I focused on people from the last two decades of surveys (2000-2018) who were childbearing age (18-45).  Immigrants and a small percentage of respondents who answered, "as many as people want," were excluded  (sample size = 3,390): 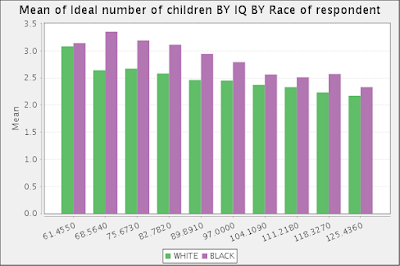 The top graph shows results for men and women, and the bottom one is for blacks and whites (other non-whites were omitted).

Ideal family size drops a lot as IQ increases, and the pattern is similar for males and females. People with IQs in the low 60s think more than three children is the right size, while the smartest group say the ideal size is a little over two.

Looking at the bottom graph, the drop for blacks is even sharper than for whites.

To the extent that people have the number of children they think is ideal, American attitudes are dysgenic. The wrong people are idealizing large families. With each generation, we're getting genetically dumber.

Who's more likely to be unfaithful: smart or dumb people?

There is a tendency among people who take IQ seriously to believe that greater morality comes with intelligence.  While smarts enable a person to see more clearly long-term consequences of his actions and to understand moral systems more deeply, I'm skeptical that IQ is related to the emotional component of morality.  I suspect smart people are just as cold-blooded as the unintelligent.

Let's focus on one type of immorality: cheating on your spouse.  The General Social Survey asked adults, "Have you ever had sex with someone other than your husband or wife while you were married?"  Here are the answers by IQ level for whites and blacks (samples = 9,391 and 1,410): 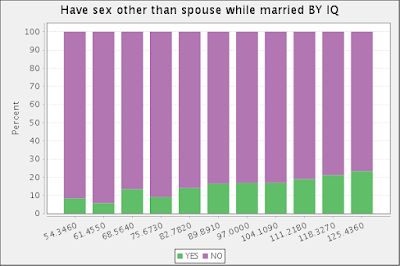 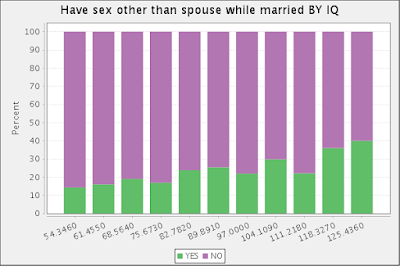 For both groups, the risk of infidelity rises with IQ.  Perhaps smarter people have a greater ability to attract partners.  Perhaps they have more social opportunities, or think they are better at fooling their partners. Whatever the case, this data makes bright people look like jerks.
at June 28, 2019 No comments:
Email ThisBlogThis!Share to TwitterShare to FacebookShare to Pinterest
Labels: IQ, Marital Infidelity, Morality

Steve Sailer wrote yesterday that, "A new study from Georgetown University reveals that if the student bodies of the 200 most selective American colleges were enrolled solely on objective SAT or ACT aptitude test scores, their student bodies would increase from 66 percent white under the current subjective system to 75 percent white."  Giving more weight to less objective criteria like essay writing hurts whites and white males the most.

Let's look at General Social Survey (data) to get a sense of the situation for all universities, not just the top schools.

To get a large enough sample size, I looked at the survey years from 2000 to 2018 and ages 25 to 64.  Only Americans born in the US were included since immigrants are disadvantaged on English-language IQ tests (sample size = 8,134).

Here are the percentages who did not go far enough broken out by race:

Percent who did not go far enough


Percent who went too far

Whites are supposed to be the group who use their pull to get unqualified children into college and who are favored by professors, etc., but both blacks and other non-whites are more likely to get at least a 4-year degree when they don't have the brains to earn it.  More evidence of non-white privilege.

What is the IQ of the average police officer?

Anyone who has thought about it for more than a minute knows that policing is a tough job.  You have to deal with screwed-up people and situations all the time, and there is bureaucratic BS up the ying-yang.  Like a high-paid ER doctor, you have to make life-and-death decisions in a split second, and let's not forget that many people hate you for your efforts, and even want to kill you. Heck, you might go to prison if authorities don't like how you behave on the job.

Good law enforcement requires real ability, but what is the average intelligence of an American police officer?

Using General Social Survey data, I identified 90 law enforcement officers. Their average IQ is 100.2.  If we look at blacks and whites separately, the means are 99.4 and 100.3, respectively.  Female officers averaged 99.0, while the average man was 100.5.

I work with many aspiring police officers, and they seem to be motivated by the excitement and the desire to be the hero rather than the security of a government job and the early retirement. Money does not seem to be a priority (although it never hurts).

To inspire a talented young man to choose policing as a career, society needs to portray officers as something like superheroes, not as the executioners of innocent black men. Ironically, demonizing law enforcement might push away the talented and attract the leftovers who are more likely to use excessive force against minorities.
at June 25, 2019 6 comments:
Email ThisBlogThis!Share to TwitterShare to FacebookShare to Pinterest
Labels: Gender, IQ, Police, Race

Another indicator that Jews tend to be clannish

I showed recently that Americans overwhelming select someone of the same race for a best friend.  Friendship is a good measure of how well groups are mixing, or, on the other hand, how much they cluster.

In this post, let's focus on religion. Does your best friend share your religious affiliation?  I used General Social Survey (GSS) data to answer this question (sample size = 1,932).  Here are the percentages who indicated a religious match between themselves and their best friend:

Percent whose best friend belongs to the same religion

Jews emerge as the group that clusters the most.  You might respond that Protestants have basically the same number, but we would expect a high number for a such a large group.  According to the latest GSS, 48.9% of Americans are Protestant, 23.3% are None, 21.2% are Catholic, and 1.7% are Jewish. If Protestants picked their friends at random, their best friend would also be Protestant around half the time. For Jews, a random process would give a Jewish best friend less than 2 percent of the time, and yet the number is over 75%.  This shows an intense level of clustering among Jews.
at June 20, 2019 1 comment:
Email ThisBlogThis!Share to TwitterShare to FacebookShare to Pinterest
Labels: Clannishness, Ethnocentrism, Friendship, Homophily, Jews, Religion

Smart people are more varied than other people

I showed in an earlier post that, according to the General Social Survey (GSS), the smartest category of people are also the most diverse in terms of income.  Some smart folks are very rich, some are very poor.  They are all over the map.  Nicholas Taleb takes advantage of the wide income dispersion among the intelligent in order to make IQ look like it cannot predict income among smart people and thus is a worthless concept.

If he were biased against the concept of social class like he is against IQ, he could use the same tactic: According to GSS data, the correlation between father's education and offspring income is a paltry .13, and the standard deviation (sd) for people with the most educated dads is $42,000, while it is only $33,000 for those with dads who only finished high school.  For non-nerds who don't know stats, sd is a measure of how spread out the scores are for a sample of people, in this case, individual incomes.

Turns out, people in the smartest category are diverse on many variables, not just income.  I'll give you the sd for the middle and highest IQ categories to show what I mean.

In every case, intelligent folks are more diverse than ordinary people.  Compared to the middle, smart people are simply all over the place in terms of education, job prestige, politics (higher scores mean more conservative), church attendance, and belief in God.  Humans beings are so complicated, it's hard to predict which box a person will fall into, and it's even harder when the person is very smart.

This reminds me of the argument that Michael Levin made in Why Race Matters that, because whites are more intelligent, on average, than blacks, they have greater free will, and thus perhaps greater responsibility for their actions.

(You might argue that the sd is higher for smart people simply because their means are higher, thus one can expect the sd's to also be larger. Actually, the means for political orientation, church attendance, and confidence in God are lower for the smart group.)

UPDATE:  I am also reminded of what is said about Jews, a famously smart group:  two Jews, three opinions.