Focus on money by political orientation

In his wonderful political novel The Possessed, Fyodor Dostoevsky wrote that socialists obsess about their own money more than anyone. Anecdotally, the flaming lesbian socialist professor whose office is next to mine is constantly on the phone with someone talking about her investments. (I can see why she worries. She has a lot more money than the rest of us. Her salary is 20 percent higher than any faculty I know.)

The General Social Survey asked respondents who is in charge of family finances (sample size = 208). This might not be the perfect measure of concern for money, but it's the best one I could find.

Twelve percent of liberals compared to 24 percent of conservatives said their spouse takes care of the money. (Gender is not a factor. Also--most couples share the responsibility.) So, by this measure, twice as many conservatives don't focus on money.
at December 29, 2011 6 comments:
Email ThisBlogThis!Share to TwitterShare to FacebookShare to Pinterest
Labels: Liberals, Money, Political Views

Merry Christmas to me when mainstream pundits start sounding like us race realists. From Ann Coulter:


In the upcoming presidential election, two issues are more important than any others: repealing Obamacare and halting illegal immigration. If we fail at either one, the country will be changed permanently.

Taxes can be raised and lowered. Regulations can be removed (though they rarely are). Attorneys general and Cabinet members can be fired. Laws can be repealed. Even Supreme Court justices eventually die.

But capitulate on illegal immigration, and the entire country will have the electorate of California. There will be no turning back.

By the way, Ann goes on to conclude that Bachmann and Romney are the best on illegal immigration, but that only Romney can win.
at December 28, 2011 4 comments:
Email ThisBlogThis!Share to TwitterShare to FacebookShare to Pinterest
Labels: Illegal Immigration

Using various sources (NCVS, UCR, BJS), I put together three tables which help explain why state prisoners are roughly half black even though African Americans are only 13 percent of the U.S. population. The disparity is divided into differences in commtting serious violent crimes (i.e., robbery, aggravated assault, and rape/sexual assault), differences in the chance of arrest, and differences in the probability of conviction. (One limitation is that government statisticians are idiots and lump Hispanics in with whites, so "whites in the following table actually means "whites plus Hispanics.")

For all three types of violent crime, most of the racial disparity is due to blacks committing crimes at much higher rates. You might think this is obvious, but many liberals think the gap is due to a racist criminal justice system. Some of the difference in convictions is due to a greater black risk, given a crime, of being arrested. Some of this might be due to lower average black intelligence which leads to riskier crimes.
Finally, little or none of the racial gap is due to blacks being more likely to be convicted of a felony (which is likely to land one in prison for at least a year). In fact, given an arrest for rape, a white man is more likely to be convicted than a black man. This might be, in part, due to less willingness of African American  jurors to put a fellow black behind bars for a crime that can be difficult to prove. Or perhaps victims of black offenders--often black themselves--tend to be less reliable.
Overall, if liberals are bothered by the racial disparity in prison (myself, I care about punishing bad guys), the data suggests that they should focus on black criminality, not the system.
at December 27, 2011 2 comments:
Email ThisBlogThis!Share to TwitterShare to FacebookShare to Pinterest
Labels: crime, Criminal Justice System, Racial Differences

Study: Sex differences in brain volume are related to specific skills, not to general intelligence

Do yourself a favor and read Thought Prison: The Fundamental Nature of Political Correctness--a new book written by the distinguished scholar (and reader of this blog) Dr. Bruce Charlton.  I've read 500-page books before (e.g., Interpretation of Dreams) that taught me very little, but Dr. Charlton's 2-hour book might change your worldview.  If asked, many people might say that the most serious problem facing the West today is economic, but Thought Prison makes the compelling case that the ideology of political correctness will eventually destroy us. According to Charlton, there is a small chance that we can beat it with a populist Right movement, but the more realistic response is personal defiance. What does he mean by this? I'm not going to give the whole thing away. Read the book and find out. Then comment here if you feel like it.
at December 23, 2011 2 comments:
Email ThisBlogThis!Share to TwitterShare to FacebookShare to Pinterest
Labels: Political Correctness, Western Civilization

Homosexual voting over the past three decades

Have homosexuals moved left over time? According to the GSS, it looks like they have.  Shown below are the percent (of all gay men, bisexuals, and lesbians) who voted for the Democrat in the presidential election:


Percent who voted for the Democrat

The Democrat share rose from 57 percent in 1984 to 88 percent in 2008. It looks like the culture war may have pushed non-heteros to the left (although they started this period somewhat to the left anyway) .
at December 22, 2011 5 comments:
Email ThisBlogThis!Share to TwitterShare to FacebookShare to Pinterest
Labels: Homosexuals, Voting

Characteristics of smart people who don't go to college

In the comments section of the last post, reader SFG wonders about the characteristics of people who are smart but who do not go to college.

Using GSS data, I created a two-category variable where people with eight through ten out of ten questions correct on a vocabulary quiz but who never went to college are assigned a one, and everyone else is given a zero. Those in the first category make up about 11 percent of the total adult population surveyed over the past 40 years.

Next, I chose eight variables as predictors. Here are the logistic regression coefficients (sample size = 16,215):

All of the predictors are significantly related to the outcome variable except for political conservatism. So what is the profile of someone who is smart but went no further than high school?  I'll attempt to list factors from most powerful to least: older, white, being surveyed in earlier years, female, having an educated father, going to church less often, and having fewer children.

I also compared the mean incomes of the two categories. The smart group that didn't go to college made about $1,000 more a year than the average for the other group.

Many of the factors make sense. Older people from earlier cohorts were less likely to go to college, even if they were intelligent. The same for women. Blacks are much less likely to be bright people who fail to attend college. Having a successful father can sometimes open a good career path that requires no higher education. Perhaps irreligiosity indicates unconventionality. Political attitudes appear to have no effect on choosing to avoid college.
at December 18, 2011 27 comments:
Email ThisBlogThis!Share to TwitterShare to FacebookShare to Pinterest
Labels: Education, Income, IQ

There is a four-tenths of a standard deviation between the smart and dull group--a medium-size gap.  It is not clear to me that the view that spanking is never necessary is the rational one. Smart people do seem to be leading the charge against strict discipline.
at December 13, 2011 31 comments:
Email ThisBlogThis!Share to TwitterShare to FacebookShare to Pinterest
Labels: IQ, Spanking

In The Science of Evil, Simon Baron-Cohen reports research that found that artists are more empathetic than scientists and engineers. I replicated this with GSS data. Respondents were asked how well does the following statement describe them: "Sometimes I don't feel very sorry for other people when they are having problems." Answers ranged from "does not describe very well" (1) to "describes very well" (5). I reverse-scored the answers so that high numbers reflect high empathy. Here are the means (sample size = 124):

This is four-tenths of a standard deviation difference--a medium-size gap--but it is not statistically significant.
at December 12, 2011 11 comments:
Email ThisBlogThis!Share to TwitterShare to FacebookShare to Pinterest
Labels: Artists, Empathy, Scientists

As a follow-up to the last post, I looked to see if skin color among blacks is related to occupational prestige. Interviewers rated skin color from very dark brown to very light brown. Here are the mean prestige scores (GSS data, sample size = 454):

Lighter groups tend to have better jobs than darker groups. This is consistent with the common observation that elite blacks often look like they have more European ancestry.
at December 09, 2011 7 comments:
Email ThisBlogThis!Share to TwitterShare to FacebookShare to Pinterest
Labels: Job Prestige, Skin color

They review some interesting research by Ducrest et al. (2008) which found that in 20 wild vertebrate species, darker individuals are more aggressive, sexually active, and resistant to stress. They also tend to have a larger body mass and greater energy and physical activity. For example, darker maned male lions are reported to be more aggressive and sexually more active, and darker barn owls show stronger immune response. Darker coloration is associated with enhanced fertility, female sexual receptivity, male sexual motivation and performance, and higher levels of testosterone. Ducrest et al., however, cautioned that these findings might not apply to humans.
at December 06, 2011 60 comments:
Email ThisBlogThis!Share to TwitterShare to FacebookShare to Pinterest
Labels: crime, HIV/AIDS, Infant Mortality, IQ, Life Expectancy, Skin color

Zbigniew Brzezinski said on Morning Joe this morning that the U.S. is the most socially unjust country in the world because our GINI coefficient is the highest in the world. He's close: We are 40th.

I love American elites. They import tens of millions of poor immigrants over the years and then point and say, "The U.S. is evil because it's so unequal!"
at December 02, 2011 4 comments:
Email ThisBlogThis!Share to TwitterShare to FacebookShare to Pinterest
Labels: Immigration, Inequality 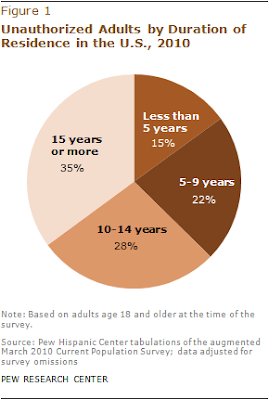 Newt Gingrich says we shouldn't deport illegals who have roots here. The Pew pie chart shows that only 15 percent of illegal aliens have been here less than 5 years. According to the lower graph, 46 percent have minor children here in the country. By Newt's standard, few of the ten million (Pew's estimate) should be sent home.  (I love the term "unauthorized immigrant." That's like calling a burglar an "unapproved entrant.") 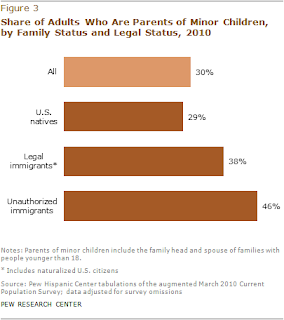 I looked at General Social Survey data to see how much IQ has declined in the US since the early 70s when the GSS was started. I set whites...