A reader claimed in the comments of the last post that liberals live very traditional lifestyles. This is simply not true.

And even though there are fewer liberals who have ever been married and who therefore can get divorced, their rate of divorce is higher:


Liberals are also more likely to be unfaithful:


Percent ever cheated on spouse


Percent who cohabited before marriage (1994--most recent year)


Percent of married who have no children

The cross-national correlation between IQ and divorce

For 72 countries, I calculate a correlation of .44 between the mean IQ of a country and the rate of divorce. The greater wealth of intelligent countries reduces the economic necessity of marriage, but the correlation between per capita GDP and divorce is only .28.

I suspect that less intelligent countries are more likely to see marriage as a change in life status, not a contract. The acid of modern rationality reduces institutions like marriage to voluntary agreements that can be dissolved if unsatisfying. The focus on family used to be intergenerational; now it's business between adults.
at July 27, 2012 6 comments:
Email ThisBlogThis!Share to TwitterShare to FacebookShare to Pinterest
Labels: Divorce, IQ

Which kinds of countries are the most corrupt? Here are a few cross-national correlations:

Here is a nice table from the study in Social Science Research I mentioned before showing different outcomes for people raised in lesbian vs. straight homes: 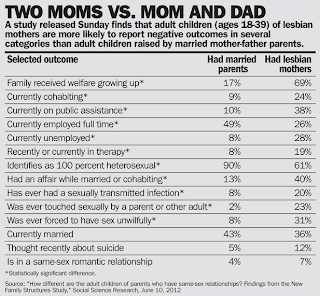 Here are additional correlates of contraceptive use and abortion cross-nationally:

Contraceptive use, abortion, and fertility cross-nationally

The cross-national correlation between contraceptive use and fertility is very large; it's -.66 for 172 countries (UN and CIA data). Not surprisingly, low fertility nations have high use rates. Rates in Europe are typically 60-plus percent for women of childbearing age who are in a relationship. The region with the lowest level is Western Africa where the numbers are roughly 10-20%.

Birth control is much more predictive of small families than abortion is. For 59 countries, the abortion-fertility correlation is only -.14. You might suspect that contraceptive use is inversely related to abortion and thus weakens the observed abortion-fertility correlation, but the fact is that high birth control countries also tend to be high abortion countries: the correlation is .12 for 59 countries. Reliance on birth control doesn't reduce abortion rates. Evidently, societies vary in their concern over fertility, and those with a high level of concern tend to focus on birth control as the first line of defense and abortion as a complementary backup.
at July 18, 2012 2 comments:
Email ThisBlogThis!Share to TwitterShare to FacebookShare to Pinterest
Labels: Abortion, Birth Control, Fertility

Razib Khan retweeted an invitation to join a live chat on how blacks don't do atheism. That made me wonder exactly what percent of American blacks don't believe in the existence of God. According to the GSS sample of 2,017 blacks, the 95% confidence interval is from 1.4 to 2.7%. For 11,866 whites, the interval is 2.4 to 3.0%. Since the two intervals overlap, there is no statistically significant racial difference.

UPDATE: Reader DR shows my error in the comments. Whites ARE significantly more likely than blacks to not believe in existence of God.
at July 18, 2012 3 comments:
Email ThisBlogThis!Share to TwitterShare to FacebookShare to Pinterest
Labels: Atheism, Blacks

For a sample of 59 countries, the correlation between sex ratio (WHO data) and the abortion rate (Guttmacher data) is -.26. In other words, countries with more men tend to have a lower abortion rate. The feminist interpretation of this would be that men are anti-abortion (i.e., they like to control women). The problem with this is that, at least in the United States, surveys indicate that men support abortion in numbers similar to women; they are just don't care about the issue as much.

Women usually turn to abortion when having a baby is inconvenient, and not having a stable relationship with a man is a major factor. It is not surprising, then, that societies that have a shortage of men (or suitable men) have high rates of abortion. The case of blacks in America is consistent with this view. Because of factors like male imprisonment, unemployment, and a lack of desire to commit, black women face a situation where there are always men ready for sex, but few who are available, willing, and suitable for a long-term relationship. The result is lots of abortions.
at July 17, 2012 No comments:
Email ThisBlogThis!Share to TwitterShare to FacebookShare to Pinterest
Labels: Abortion, Sex Ratio

I like finding big correlations, but not this time. The cross-national correlation between mean IQ and the total fertility rate for 178 countries is -.72. That's huge. The world gets dumber with each passing day.
at July 11, 2012 27 comments:
Email ThisBlogThis!Share to TwitterShare to FacebookShare to Pinterest
Labels: Fertility, IQ

I correlated this measure with the percent of the population that attends church weekly (World Values Survey). For 91 countries, it is .68--a very strong relationship. Societies with low numbers of people going to church are very likely to be dying.

By the way, I noticed that few countries are really close to 2.1. Societies tend to be either growing or dying.
at July 10, 2012 10 comments:
Email ThisBlogThis!Share to TwitterShare to FacebookShare to Pinterest
Labels: Church Attendance, Fertility

The Greediness of America

Liberals like to indict America as being uniquely money-obsessed. Sociologists claim it is a fundamental feature of the country (unlike most other countries). The World Values Survey asked respondents if the statement "wanting to get rich" sounds like them. Here are the percentages who answered "very much like me" or "like me" (N = 71,288):

Out of a sample of 52 countries, the United States ranks 41st in greediness.
at July 08, 2012 4 comments:
Email ThisBlogThis!Share to TwitterShare to FacebookShare to Pinterest
Labels: Materialism, United States

Here are a number of additional cross-national correlations that are supportive of a socially conservative orientation (the church data is from here and the divorce data from here):

Using CIA data on race (admittedly crude), I calculated the Pearson correlation between percent black and national homicide rates. For 180 countries, it is .50--a strong association. More blacks means more homicide. Percent black is as predictive as mean IQ or the GINI measure of income inequality. While we're at it, the black-inequality correlation is .45. Bigger gaps between the wealthy and the poor go hand in hand with more blacks.

Using WHO data, I calculated the cross-national correlation between annual alcohol consumption and suicide rates. For 101 countries, it is .58--a strong assocation. Countries with high levels of consumption have much more suicide. Eastern Europe illustrates this well. The average person there drinks roughly 15 liters of (pure) alcohol per year, and suicide rates are two or three times the average.

Such a finding supports the socially conservative view that drinking immoderately (or at all) needs to be discouraged.
at July 05, 2012 7 comments:
Email ThisBlogThis!Share to TwitterShare to FacebookShare to Pinterest
Labels: Alcohol, Suicide

The cross-national relationship between percent Muslim and homicide

Continuing my focus on cross-national homicide, I correlated rates with the percent of the population that is Muslim. For a sample of 181 countries, the correlation is -.17 which means that countries with more Muslims tend to have less murder. This is striking when one considers that Muslim-dominated countries tend to be poor and some of them are sub-Saharan African. After adjusting for per capita GDP and percent black, the correlation is likely to be stronger.

One note: I'm going to try to get a better idea of how relilable the homicide data are. I chose coroner's data over criminal justice data simply because I trust public health institutions more, and they tend to report more counts of homicide (suggesting that criminal justice agencies are not reporting some cases). The two systems seem to be pretty consistent in high-income countries, but just eyeballing the data, the counts from the two sources can be very different in poor countries. I suspect that politically-motivated killings in unstable countries complicate things.
at July 03, 2012 3 comments:
Email ThisBlogThis!Share to TwitterShare to FacebookShare to Pinterest
Labels: Homicide, Muslims

Using data from Richard Lynn and the recent WHO study, the correlation between national level IQ and the homicide rate across 181 countries is -.51. This is a strong association, so smarter countries are much less violent. The only cross-national correlate of homicide that is this strong is income inequality (more unequal countries are more violent). In my data set, the correlation between the GINI inequality index and homicide is .48.

UPDATE: Since I mentioned inequality, any thoughts on how to explain the correlation? The inequality-homicide link is reliable in macrolevel research. Sociologists claim that a large gap between the wealthy and the poor generates anger and resentment which low-status people take out on convenient, low-risk targets. It doesn't seem plausible to me that Bill Gates is an important cause of black-on-black ghetto violence. Compared to Europe, the US has a fairly high level of inequality, but racial diversity probably explains its inequality-homicide correlation. As for the cross-national link, is it that poorly endowed populations are both violent and unlikely to create more equal arrangements? I'll have to see how much the inequality-homicide link is reduced when adjusted for mean IQ.

Back to the US question: if American liberals are so concerned about large gaps between the wealthy and the poor, why would they invite large numbers of both Chinese and Mexican immigrants? At least the immigrants of a century ago were similar (with the exception of Jews).