Data: Dot Indians are the most industrious Americans. Feather Indians, the least. Hispanics are in the middle.

Sociologists assume that a man lacking a job is the fault of the economic system. He would take any job if it were simply available.  Common sense and behavioral genetic research contradict this. Industriousness is largely caused by genes, and people vary a great deal in this trait. Some people cannot take it easy, and some cannot not take it easy. I've talked to many people over the years who refuse to take jobs that are not acceptable to them.  That's the reality in America. Sure, you might have a small percentage with REAL health problems, but those are the exceptions.

So I'm going to use full-time work as a measure of industriousness.  I'm interested in racial and ethnic differences. Men and women still differ in employment, so let's focus on just the men. Here are the percentages of American men ages 30-64 who are employed full-time listed by ethnic group:

Looks about right. For a moment, let's compare the top group with the lowest. If it were true that discrimination determines who works, why would Asian Indians surpass every single white group?  Wouldn't a bigot choose the lamest white person over a South Asian?  While American Indians are also non-whites, at least most of them are Christians. Wouldn't a bigot choose a Christian over a heathen Hindu?  American Indians have a tragic history, and whites feel bad about that. They were here long before Europeans. Wouldn't an employer choose a Real Red American over an immigrant invader, just off the boat?

And yet, Asian Indians tower over all other groups. Why? Because biology explains better than sociology.

By the way, I'm at a cafe, and seated at the next table over is a Native American. He's super friendly. He's always here, and I'm not sure he's old enough to be retired, but he doesn't seem particularly busy. The Asian Indian guy I always see here is also popular, but he owns a business and uses the cafe to network.
at April 29, 2019 5 comments:
Email ThisBlogThis!Share to TwitterShare to FacebookShare to Pinterest
Labels: Employment, Ethnicity, Race

Data: In some cities, 3 out of 10 black men had sex before they were 13 years old

Look at this table from a study of the age at first sexual intercourse among males:

These stats support the view that blacks are shifted toward "fast" life history strategies. Along with shorter life expectancies and less investment in each child, life history theory claims that "fast" individuals mature more quickly and become sexually active at earlier ages.  Even though the study does not report figures on Asians, I'm confident they would be the lowest group.
at April 21, 2019 No comments:
Email ThisBlogThis!Share to TwitterShare to FacebookShare to Pinterest
Labels: Life History Theory, Race, Sexual Behavior

Data: Despite liberation, gay men are less happy than in 1980

The General Social Survey asks participants, "Taken all together, how would you say things are these days - would you say that you are very happy, pretty happy, or not too happy?"  I calculated the mean happiness for gay males over the past four decades.  Here is the graph: 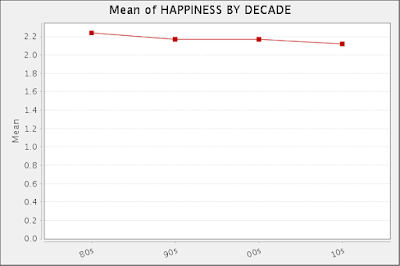 In terms of liberation, life has been good for homosexuals since 1980. Approval of homosexual sex by the general public has skyrocketed.  When I was an undergraduate, gay marriage was not even on the radar for progressives. Now it is the law of the land.  An openly gay man -- Buttigieg -- is a popular Democratic presidential candidate. In my department meeting Wednesday, a colleague boasted that her son now identifies as gay, making us all feel inferior because our kids are straight.

All this progress and liberation has really delivered on gay happiness, right?  Actually, mean happiness has dropped in every decade. Homosexual men are less happy than they were at the height of the AIDS epidemic.

This reminds me of female liberation. Women are also less happy. Look at the graph. 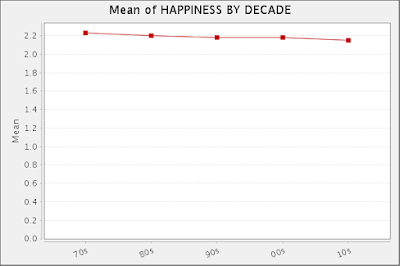 Liberation has not delivered.
at April 19, 2019 2 comments:
Email ThisBlogThis!Share to TwitterShare to FacebookShare to Pinterest
Labels: Homosexuals, Liberation, Women

Data: I'm skeptical that the Hispanic crime rate is similar to that of whites

I doubt the Hispanic crime rate is similar to that of whites. Let's put aside police statistics and victim surveys because both depend on someone reporting the crime, and immigrants are notorious for failing to report crimes out of fear of authorities.  And arrest data also depend on law enforcement policies.

The CDC has a neat website for analyzing mortality data.  I looked at homicide rates for 2017, the most recent year available. Here are the rates per 100,000 in the specific population:

Not surprisingly, blacks are at the top with a rate that is 13 1/2 times the Asian rate.  American Indians are second with a rate that is 5.7 times that of Asians.  This reminds me of Greg Cochran and Henry Harpending's hypothesis (if I remember correctly) that Native Americans never got pacified by centuries of the state weeding out the most violent.  Henry and Peter Frost published a paper three years ago that found that the English proclivity to execute criminals with abandon resulted in a country with a homicide rate that is a tiny fraction of what it was a 1,000 years ago.

Criminologists excuse black violence by blaming criminogenic urban environments. If living in a big city is the key to violence, why are rural Indians so murderous? Genes explain better than sociology.

When it comes to homicide, Hispanics resemble their racial reality: they are somewhere between American Indians and whites. Looking at Latin America, I'm pretty sure crime is a more serious problem for Hispanics than it is for whites.
at April 15, 2019 3 comments:
Email ThisBlogThis!Share to TwitterShare to FacebookShare to Pinterest
Labels: American Indians, crime, Hispanics, Race, Violence

Data: If Taleb is right that IQ is a BS measure, why do higher scorers have big brains? And why the perfect racial rankings?

A 2015 meta-analysis of 88 studies found that the correlation between human brain volume and intelligence is .24, a small-to-moderate size relationship.  In new research that re-analyzed the data from the 2015 study, the authors showed that the strength of the link depends on how well IQ is measured and the degree to which studies include a full range of values for brain volume and IQ (For example, if only college students are included, many lower IQ people will be excluded, and this will shrink the correlation.)

Based on their analysis, the researchers estimated that the true brain volume/IQ correlation is around .40 -- a fairly strong correlation.

Keep in mind that many researchers have reported racial differences in brain volume that match up with IQ differences. Rushton and Ankney (2009) summarized the research. For example, Beals et al. (1984) measured the endocranial volumes of close to 20,000 skulls from around the world. The Asian-black gap was reported to be a roughly 150 cubic centimeter advantage for Asians.

Sociologists like to crow about the immigration-low crime connection, but it undercuts their own theories

But let's not get into that literature -- that's a discussion for another day.  I'm interested in the fact that social scientists have spent a great deal of energy for more than a century concocting excuses for why poor minorities -- immigrants or native-borns -- are so heavily involved in crime.  The list is long: 1) low crime neighborhoods require years of committed investment in institutions charged with socializing youths, and migrant neighborhoods lack to residential stability, resources, and population homogeneity needed to build effective institutions; 2) migrants tend to come in with low human, social, and cultural capital which makes a criminal career more attractive; 3) due to America's xenophobia, migrants are blocked from opportunities to become integrated into mainstream society with its middle-class jobs and middle-class values; 4) the youthful migrant is torn between Old Country traditions of his parents and the lower-class American values of his native-born peers. Such alienation leads to crime.  And the list goes on and on.

But for these sociologists, refuting conservative claims takes priority over consistency. After a century of predicting lots of immigrant crime, now they're scrambling to explain why immigrants are better behaved than the rest of us, and, of course, everyone knows that they always have been better than us.

After a century of telling us that communities must be slowly built up into an ecosystem of strong institutions that effectively control the behavior of adolescents, now they tell us that people who just crossed the Rio Grande and found some shack to live in instantly create stronger communities than groups who have lived in a neighborhood for generations.

The kid whose parents come from Honduras, Guatemala, and El Salvador enjoys a rich, healthy culture that actually frowns on crime, unlike mainstream American culture. Being forced into barrios and excluded from white society is a good thing because these Hispanic communities are tight-knit, while mainstream society is atomistic and dog-eat-dog. These researchers are hilarious.  They truly suck at predicting the future, but they are very skilled at concocting explanations after the fact.
at April 12, 2019 No comments:
Email ThisBlogThis!Share to TwitterShare to FacebookShare to Pinterest

Data: What is the average IQ of your healthcare providers?

I get annoyed when a low IQ kid gets my fast food order wrong, but no biggie. It's a different story when my child is sick and needs medical treatment.

What is the mean IQ of health care workers?  To get a sufficiently large sample (GSS, no immigrants), I included the following jobs: physicians, dentists, optometrists, podiatrists other health diagnosing practitioners, registered nurses, pharmacists, dietitians, physical therapists, speech therapists, and other therapists.

For the whole group, I get a mean of 104.8. Not good. For occupations with at least 10 survey respondents:

All of these numbers are discouraging. Don't take advice from a dietician.

I've always assumed that smart people are fascinated by politics. One complaint I have of social scientists is that they're so obsessed with politics, they can't conduct fair research. (But I can hear you saying, "You said SMART people.")  Anyway, is my assumption correct? Is it different for men and women?

The General Social Survey asked respondents: "How interested would you say you personally are in politics?" Answers ranged from 'very interested' to 'not at all interested.'  I measure IQ with a 10 question vocabulary quiz (sample size = 1,141): 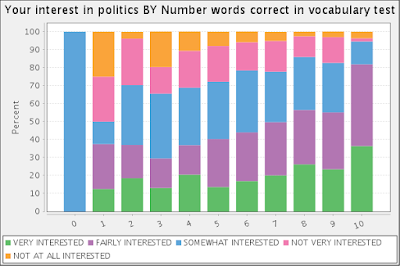 Look at how those scoring a perfect score on the test are much more interested in politics than any other group. To get precise, the correlation between the two variables is .20 -- a moderate relationship. 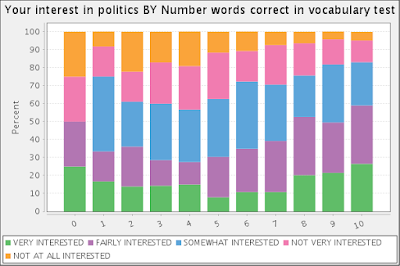 I separated by sex because I suspected that the rise in interest as one moves up the IQ scale might be sharper for men. My experience is that smart women are more interested in politics than less intelligent women, but I see more intensity among men.

The female pattern is similar to that for men. The correlation is slightly weaker -- .18. The gender gap is pretty visible at the highest IQ level: 16.8% of these women have little or no interest, compared to only 5.4% of the men.

Did Ireland used to be dumb? A look at eminent scientists

Some researchers have claimed that the average IQ of the Irish used to be really low by West European standards but has recently caught up, ...