God versus Darwin: What is the best predictor of belief in evolution? I guessed education, but I was wrong. The General Social Survey asked a representative sample of Americans in 2006 whether the idea that humans evolved from earlier animals is true or false. Only 49.6% said true. Here is the list of predictors I included in a multivariate model, and the standardized OLS coefficients. (I know, I know--my dependent variable should be normally distributed when estimating OLS coefficients, but the technique is robust enough to handle a dichotomous variable that is evenly distributed between the two categories).

* not significant at .05 level, two-tailed test


Except for race (black v. white) all the effects are statistically significant. Men and younger people are more likely to accept evolution, but the tendency is slight. Being more educated, smarter, or saying that you are informed about science and technology is not particularly predictive--at least not more than being liberal.

It turns out that the bigger winner is religiosity--as church attendance increases, so does skepticism about evolution. Seventy-two percent of people who never go to church believe we evolved from earlier animals: the number for those who attend more than weekly is only 13%! God and Darwin may not necessarily be logically incompatible, but there is a clear sociological divide.
at December 31, 2007 5 comments:
Email ThisBlogThis!Share to TwitterShare to FacebookShare to Pinterest
Labels: Evolution, Religiosity

Sixteen percent of female veterans are lesbian: Folks with their eyes open can see that gay men are more feminine than straight guys, while lesbians are more masculine than hetero women. Don't believe me? Well, let's test the hypothesis with the military. I bet that the percentage of female veterans who are lesbian is higher than the share of male veterans who are gay. The General Social Survey asked 3,644 Americans about the gender of their sex partners, and if they have served in the military. Here are the percentages who are gay and straight (warning: samples sizes are low for homosexual men and lesbians):


Percent who are homosexual

Religion appeals to the smart, but not the really smart: It's my impression that the smarter the person, the less religious they tend to be. I figure that smart people read a lot, and as one digs deeper into any religion, it is unlikely to bear careful scrutiny. On the other hand, there are many intelligent people who are very involved in a particular faith, so let's have the data decide. The General Social Survey asked 22,845 people how often they attend church, as well as administering to them a ten word vocabulary test. I calculated mean attendance at each level of questions answered correctly:

A "4" means the respondent attends monthly, "3" is a few times a year, and "5" is 2 or 3 times a month. The two smartest categories go to church the least: even less frequently than the low-IQ folks who would be expected to show less middle-class conformity. I'm not surprised that peak attendance is seen among smart, but not really smart people. (The modal category for vocab is 6 out of 10 correct). Highly intelligent people can be religious, but evidently it is an uphill battle.
at December 18, 2007 4 comments:
Email ThisBlogThis!Share to TwitterShare to FacebookShare to Pinterest
Labels: IQ, Religiosity

In previous posts, I've drawn characterizations of a number of large countries (United States, China, and Mexico) based on World Values Surveys. Now, I would like to report what I found for India. In 1990, 2,500 Indians were sampled and asked more than 200 questions about their values and beliefs over a broad range of areas: work, family, religion, government, and nation. I list below those questions where Indian responses were in the top three or bottom three among all the countries surveyed (Ten to 50 countries were surveyed, depending on the question. Keep in mind that the sample was tilted toward more-developed countries). This strategy allows us to see in which ways a country is distinctive. There are many questions where Indians were in the middle, which indicates that the country is not much different than a typical country in the sample on many issues:


Top 3
work is very important in my life
I enjoy my work: it is the most important thing in my life
most important aspect of a job is the chance of promotion
there are people in the country who are poor because they are lazy

has a lot of confidence in church; armed forces; civil service; political system
proud of country's scientific achievements
proud to be Indian

trust my family
trust my nationality
trust my ethnic group

we have to accept environmental problems to combat unemployment

during the past few weeks, I felt pleased about something I accomplished
success is due to luck and connections, not hard work
work should become less important in our lives
self-development should become more important

it is proper for churches to speak out on abortion; disarmament; Third World problems; extramarital affairs; unemployment; racial discrimination; euthanasia; and ecology

if an unjust law were passed, I could do nothing about it


Summary: Based on the list, India can be characterized as: work-oriented; socially conservative but in favor of reforms for women; moralistic; religious; against politically active religion; not tolerant; trusting of those in power and other Indians; ethnically and nationally proud; and politically self-efficacious.
at December 15, 2007 4 comments:
Email ThisBlogThis!Share to TwitterShare to FacebookShare to Pinterest
Labels: India

My comment was just deleted from this thread at Chronicles. I was debating Mr. Fleming about Mormonism. In a nutshell, he wrote a series of posts about how dreadful that religion is, and I defended it. He seems to like writing all sorts of nasty things about people and groups, but when I responded in kind, he showed his little-girl sensitivity and deleted my last post. So, in case any of the readers of that thread wander over to this blog, here is my (paraphrased) censored post:

1. Fleming claims I am a liar: I say I'm one faith, when really I'm secretly Mormon. I told him to give me an e-mail address, and I'll have my priest vouch for me. [This outrageous offer really deserves censorship, no?] I then told him his baseless maligning of me and a perfectly respectable religion (Mormonism) reveals a shriveled soul. (Fleming is free to come here and call me anything, and it will, of course, not be deleted).

2. Fleming droned about how prohibiting Catholic and Orthodox members from associating with members of another faith is not superstitious, and proceeded to give me the endless history--what a windy prof--explaining that prohibition. I then responded that, by his way of arguing, only the policies of our faiths can be given historical explanations to show they are understandable and reasonable. Every Mormon practice, however, is wacko, sinister, or stupid.

3. Fleming admitted that he is not a good enough person to pray for people like Mormons to become Christians. I responded, exactly, the truth emerges. I told him that my wife read his comments and suggests that he go to confession.

UPDATE: It now looks like I have been banned from posting at Chronicles--I attempted unsuccesfully to post that my previous comments had been deleted, and could be found here at my blog. The enemies of the Old Right may have a point about there being fascists (and bigots) in our ranks.

My Chronicles link will remain, however, because I don't censor.

UPDATE II: I see that Fleming has also banned the Mormon commentator on this thread. So he can trash them, but then does not allow a response. He's too thick to realize that this approach just convinces Mormons that everyone is out to get them and therefore is proof of the truth of their faith.
at December 14, 2007 56 comments:
Email ThisBlogThis!Share to TwitterShare to FacebookShare to Pinterest
Labels: Censorship

Getting a break on a traffic ticket is degrading 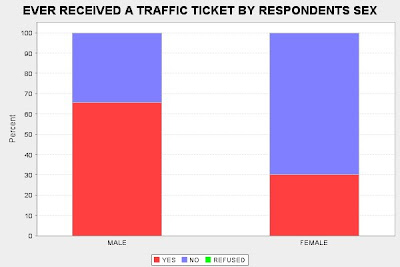 As a follow-up to the last post, I looked at the 10,792 men and women who were asked if they ever received a ticket for a traffic violation. Exactly 65.5% of men did, but only 30.0% of women have been ticketed. Now, the God of Equality has written on tablets that men and women are interchangeable, so these numbers do not reflect differences in driving. So law enforcement must be targeting men, but no... wait... the God of the Underdog has written on other tablets that the powerful exploit the powerless, so the cops must somehow be going after women.... I give up--I guess the Gods' ways are mysterious, and we must walk by faith.

Aha! I knew the Gods would show me the way. Men objectify women, and since they see them as sex objects and not human beings, they think giving a woman a break might lead to sex, and so they deny her the dignity of receiving a ticket like any fully human person would get. Yes!
at December 11, 2007 5 comments:
Email ThisBlogThis!Share to TwitterShare to FacebookShare to Pinterest
Labels: Driving, Gender

Mex-Ams are the worst drivers: A large sample of Americans (8,517) was asked by the General Social Survey if they had ever been given a traffic ticket. I calculated the percent who answered "yes" for every ethnic group with at least 100 respondents:


Percent who ever received a traffic ticket

Some of the pattern might be explained by where you live: people of English, German, Scottish, Norwegian, or Amerindian ancestry are disproportionately rural/small town/suburban--areas where people drive a lot. But this does not get Mex-Ams off the hook. They tend to be urban: Seventy-two percent live in more populated areas, compared to 62% of Americans.

And take notice of all those African Americans who are being ticketed for "driving while Black."
at December 08, 2007 No comments:
Email ThisBlogThis!Share to TwitterShare to FacebookShare to Pinterest
Labels: Driving, Ethnic Groups

Married women who are very liberal are most likely to cheat or be in an open relationship: The General Social Survey asks participants their marital status and the number of sexual partners one has had in the past year (N=3,330). Here are the numbers for women:

One out of ten extremely liberal married women had sex with someone other than their husband. So all you guys out their who like to sleep with married women, you now know where to focus your search. (If your town is short on radicals, the extreme Right seems to be the next best choice.)
at December 06, 2007 7 comments:
Email ThisBlogThis!Share to TwitterShare to FacebookShare to Pinterest
Labels: Infidelity, Political Orientation

More Mexican Americans use drugs than any other group: General Social Survey respondents (N=1839) were asked if they had used illegal drugs in the past year. Here are the percentages who answered yes by their ethnic background:


Percent who used illegal drugs in the past year: