Is Douthat right that Rush ruined the GOP?

Ross Douthat wrote in the NYT recently that the declining appeal of the GOP is the fault of Rush Limbaugh. He claims that Republicans were a 55% proposition during the Reagan Era because the message of conservatism was preached by well-bred men like William F. Buckley. Rush came along and turned conservatism into something angry and strident and that only appeals to 45% of voters.

If Ross is correct, we should see greater support for Reagan among racial minorities--the groups we have a hard time winning over. After all, Buckley was a leading advocate for conservatism during that time and Rush was unknown.

Using the General Social Survey, we can compare minority deficits over time. I calculate this as the percent of a racial minority voting for the GOP presidential candidate minus the percent of all voters who cast a vote for the Republican candidate.

Damn, impressive: under Buckley and Reagan sophistication, Blacks and Mex-Ams supported the GOP by only 18 to 48 points less than the general population! The power of positivity!

And since then? Bush Sr. wasn't strident. Perhaps he did better.

The numbers are slightly less bad with grumpy Dole.

It looks like angry Rush didn't chase away Mex-Ams in 2000.

The Republicans did no better among minorities before strident Rush became influential in the early 1990s.

Douthat ignores the obvious: the GOP is struggling because there were fewer than 20 million Hispanics during the Reagan Era. In 2021, there are more than 60 million--and this perennially poor group likes generous social programs and is susceptible to anti-white propaganda like all non-white groups. And probably will be for a very long time.

Which religion has the most forgiving people?

The General Social Survey asked respondents if it is true that: "I sometimes try to get even rather than forgive and forget." Below you see the answers by religious affiliation. 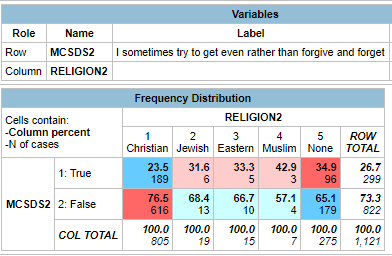 All groups have higher rates of vengefulness than Christians, including the "nones." This makes sense since Christianity stresses forgiveness.

Among Christians, those that attend church all the time are the most forgiving. 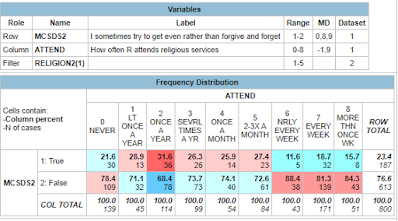 And nowadays many of the people with no religion like to accuse devout Christians of being the haters.

What is the mean IQ of whites who say their ethnicity is "American only"?

Based on the General Social Survey, if you ask Americans where their families originally came from, they will typically give you an answer. But about 1% of whites and 13% of blacks will tell you they are "American only." 54% of whites who give this answer live in the South, and Americans of Scots-Irish ancestry are known to sometimes give this answer. By contrast, "American only" blacks are concentrated in the mid-Atlantic and East North Central regions.

And their mean IQs? 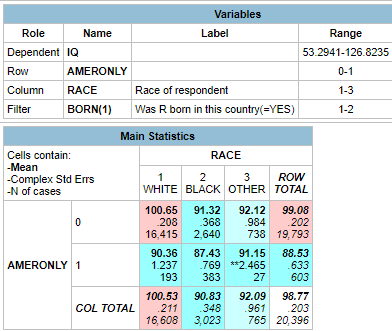 I wouldn't generalize these findings to the Scots-Irish. Many of the whites, and perhaps some from other races, who say "American only" are probably from lower IQ families who simply have not kept track of where their people are from. Or lower IQ people might be more likely to prioritize their American identity.

at February 18, 2021 No comments:
Email ThisBlogThis!Share to TwitterShare to FacebookShare to Pinterest
Labels: American Only, Ethnicity, IQ, Race, Scots-Irish

Are French Americans an underprivileged minority?

In "The Son Also Rises," Gregory Clark presents historical data that suggests that French Americans are an underprivileged minority. They have been underrepresented among doctors and lawyers, for example.

Here are mean years of schooling for the French versus other white Americans: 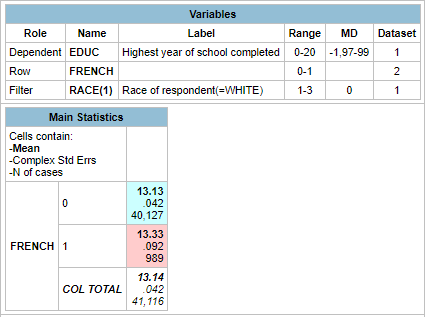 No difference in education. Here's median income in 1986 dollars: 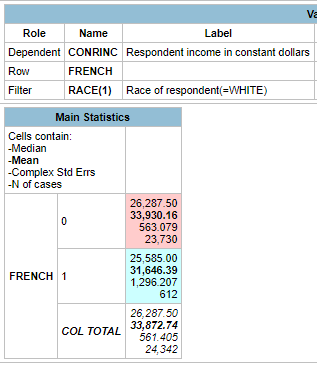 A lower median income for Americans of French descent. And mean job prestige: 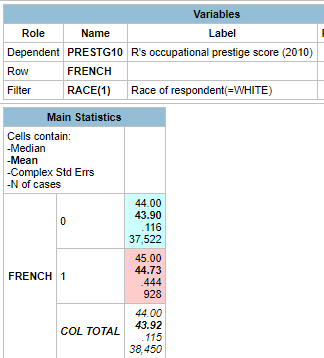 The French have a slightly higher mean job prestige. And IQ? 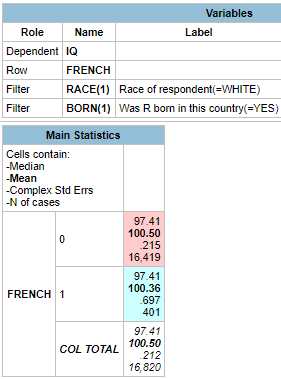 Clark predicted to the French would eventually move to average levels. It looks like they've made it.

Are Christians repressed and thus unhappy?

A common claim by liberals and anti-Christians is that Christians are unhappy because the religion is repressive.

The General Social Survey Survey asks people how happy they are overall these days with answers ranging from not too happy (1) to pretty happy (2) and very happy (3). Here are the means for various Christians and those with no religion: 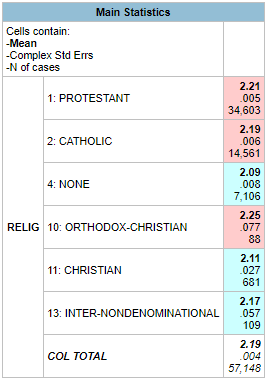 All five Christian groups have higher happiness averages than the "nones."

What about devout Christians? Maybe they are the miserable ones.

The research literature in general reports that religiosity is associated with a wide range of positive characteristics, but that doesn't stop smug, ignorant anti-Christians from going on about how religion is harmful.

Has the mean IQ of American Jews fallen because of intermarriage?

Someone claimed on Twitter that the mean IQ of American Jews has been falling due to intermarriage. What do General Social Survey data have to say? Here are mean IQs by decade since the 1970s: 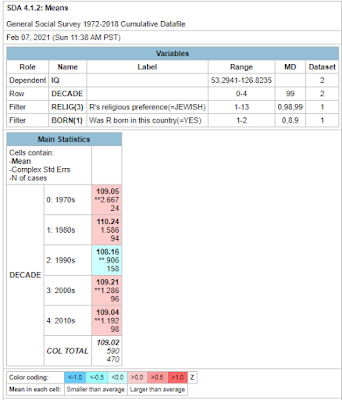 No evidence of a decrease here.