Single, childless women are less happy, and it's due to genes

In the last post, General Social Survey data indicated that researcher Paul Dolan was wrong in claiming that single, childless women are happier than married women with kids.  In the old days, I would have focused, at least some, on the Durkheimian idea that social roles shape characteristics like one's level of happiness.  I was trained as a sociologist, and it has been my instinct to see social forces as important.

Years of study have convinced me that it is time to focus more on biological forces. The correlation between marriage and well-being need not be causal: people who are genetically happy might simply select themselves into marriage.  In fact, the correlations between marriage and a host of positives--greater financial success, mental and physical health, lower mortality, less risky behavior, less crime, and longer longevity--might be due to common genes which cause the correlations.

A study by Johnson et al. (2004) supports this idea.  Analyzing data on a sample of over 7,000 adults that included more than 2,500 twin pairs, they found that certain heritable traits predict marriage, and that much of the link between being married and being happy is due to genes.

Specifically, they found the following traits for married versus single women: married women are more affectionate, nervous, careful, and traditional, and they feel like they are treated fairly by others. On the flip side, single women are less sociable, more risk-taking; they're calmer, more modern, and they think they are treated unjustly by others.

The profile of married men versus single men is very different: married men are cheerful, active, persistent, decisive, persuasive, aggressive, and traditional. They are less prone to fantasy, and they think that people treat them fairly.  Single men tend to be the opposite: They are sullen, indecisive, undisciplined, passive, modern, prone to fantasy, and they feel they are treated unfairly.

All of these traits are strongly influenced by genes. According to the study, the heritability of being married is about .7, meaning that 70% of whether or not people are married is due to variation in genes.

So it looks like married people, especially men, tend to be happier because of their personalities. Affectionate, sociable women seek out marriage, and so do cheerful men who have the traits that lead to career success.  Married women seem drawn to comfort, security, and affection.  Men, in general, appear to be drawn to marriage, and the success-bound ones achieve it.

Single men and women are more modern, so they probably see marriage as less desirable, less expected, and both tend to be disagreeable. Single men might be less happy because they are less successful, and single women are more alienated, which is associated with sadness and mental health issues.  In addition, single women are risk-takers, and seem less drawn to the security and comfort of a permanent union.

A piece in the Guardian reported that women are happiest if they stay single and childless, according to research done by London School of Economics professor Paul Dolan. 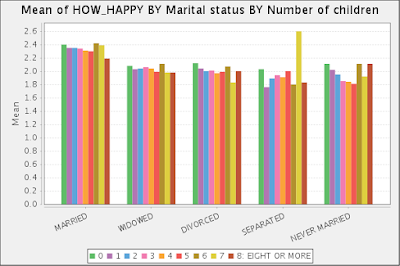 Childless, never-married women are less happy than married women at all nine levels of family size.  A married women with eight or more kids is happier than a single, childless woman.  The difference between between the latter and married women as a whole is close to half a standard deviation, a good-sized gap.

Dolan claims married women only say they are happy when they are interviewed with their husband in the room.  I compared women who were interviewed in person with those who completed a self-adminstered questionnaire.  The results were the same for both groups.


at May 26, 2019 2 comments:
Email ThisBlogThis!Share to TwitterShare to FacebookShare to Pinterest
Labels: Happiness, Marriage, Women

Authors of a paper published earlier this year in Behavior Genetics have made arguments similar to those of  HBD writers Greg Cochran and JayMan: psychological traits are basically the result of 1) genes, and 2) noise.

Years ago, behavioral geneticists discovered that the environments shared by siblings have little impact on how you turn out. By contrast, the environment you experience that is unique to you appeared to be about as important as genes -- both of them explaining roughly half of the story.

The authors, two Russians from St. Petersburg University (they're Russians, so they must be evil) explain that research trying to identify specific factors from the unique environment that are important has been mostly unsuccessful.  Factors like illnesses and accidents typically explain less than 3% of the examined traits.

In addition, genetic research (mostly experiments on animals) has shown that traits depend a great deal on stochasticity--a fancy term for randomness, or "luck."  For instance, ultraviolet rays increase genetic mutation rates in organisms, but exactly which genes will be affected is a stochastic process. Random genetic errors that occur in the early stages of embryonic development will be more consequential; in this case, all the descendants of the initial mutant cell will also be mutant.

Complex organic systems like the human body or brain are especially likely to be shaped by random events. For example, in female embryos, one of the two X-chromosomes is inactivated as a Barr body.  Each cell will make a random 'decision' which X-chromosome (the paternal or maternal) gets inactivated, and the 'decision' is maintained in subsequent cell divisions.  As a result, the female becomes mosaic.  In heterozygous females with the EDA mutation, you get ectodermal dysplasia which leads to an absence of perspiratory glands.  Depending on what X-chromosome is active, some skin areas are defective in sweating, while other areas are normal. The mosaicism is random.  Even identical twins raised in very similar environments will differ significantly.

Another human example is the growth of synapses in the developing brain.  While the number and locations of these connections are under some genetic control, research has demonstrated a significant stochastic component.  So again, identical twins raised the same will end up with brain wirings that are somewhat different, this is simply due to random differences in development, and it can cause behavioral differences.

These authors do not mean that these random factors are actually causal factors that simply have not been identified yet. They are claiming that pure randomness is simply a key part of our development, and the hard determinist view is simply incorrect.

They don't touch the political implications of all this, but I'll jump in.  To summarize, it's only a little bit of a simplification to say that we may be the product of genes and random events.  Genetic research is also telling us that hundreds or thousands of genes influence a trait, but each only a trivial bit, so simple pathways for intervention and improvement might be hard to find.  And you can't control randomness, so there seem to be fewer and fewer possibilities for government to step in and effectively address social problems -- at least in ways acceptable to liberals.  The old-time conservative who contended that human nature is tragically flawed and that one must resign oneself to human limitation seems more and more like a prescient, wise person.

at May 23, 2019 No comments:
Email ThisBlogThis!Share to TwitterShare to FacebookShare to Pinterest
Labels: Genes, Personality Traits, Stochasticity

How are we doing on mixing the races?

One of the strongest findings in sociology is that people follow the principle of homophily--they naturally associate with people like themselves.  It goes without saying that sociologists never take the next logical step and conclude that this universal tendency is rooted in biology; that it is very resistant to change; that it's counterproductive to swim against a very strong tide. The typical view of a sociologist when it comes to a social universal is, "Yes, we see it everywhere, so naturally, we should get rid of it!"

Nowhere is this truer than in the case of race.  Around the entire globe, people of the same race tend to gravitate to each other, so in America, we're bound and determined to see the day when a random white person has all non-white buddies.

So how are we doing on this?  I looked at a question given in the General Social Survey where participants were asked to list friends (sample size = 1,300).  I assume that the first person mentioned is a close friend, if not the closest friend.  When the respondent is white, how often was the first friend mentioned black?  Two percent of the time.  Black respondents first mentioned a white friend 11.2% of the time.

If making friends were truly random, the distribution of friends would match the racial distribution of the population. (We'll set aside the goal of preferring friends from other races.)  For example, 13% of the first friends mentioned by whites should be black since blacks are 13% of the population.  But when I do the math that takes into account the size of the black and white populations, blacks are 37.1 times more likely to say their first-mentioned friend is black rather than white. A white is 9.3 times more likely to mention a white person.  I doubt the numbers were much different in 1960.

For all America's efforts, biology seems to be stronger than sociology.
at May 17, 2019 No comments:
Email ThisBlogThis!Share to TwitterShare to FacebookShare to Pinterest
Labels: Blacks, Friends, Integration, Race, Whites

Which explains how prestigious your job is--intersectional theory or HBD?

On Twitter, Steve Sailer writes, "The pattern that gay black males tend to assimilate into white corporate culture better than do straight black males deserves more social science attention than it has received.  It's hard to notice if you are Woke and believe in the conventional wisdom about Patriarchy, etc."

Let's test this kind of idea with General Social Survey (GSS) data.  Based on intersectionality theory--experiencing more discrimination with each additional minority status--job prestige rankings should look something like this:

By contrast, biological theory would focus on traits that are important for high-status jobs, and the obvious candidate is intelligence and the glaring racial gap in IQ. So this view would predict that the big divide will be race, with whites above average in job prestige and blacks below average. The other demographics shouldn't matter much.

And what are the facts?  According to GSS data for 19,901 respondents:

As predicted, the major divide is race.  All whites are above average, and all blacks are below.  If intersectional theory were true, black lesbians would be on the bottom, and straight white males would occupy the top position.  Neither is the case.  Biological theory would predict no disadvantage for homosexuals--in fact, I reported in a previous analysis that they have above-average IQs--and indeed they do well.

And relevant to Steve's point about black males, homosexuals do better than straights, which contradicts the claim that it's all about intersectional discrimination.

at May 14, 2019 No comments:
Email ThisBlogThis!Share to TwitterShare to FacebookShare to Pinterest
Labels: Gender, Job Prestige, Race, Sexual Orientation 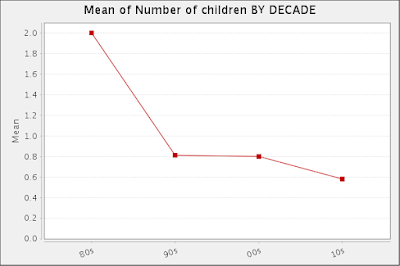