According to the General Social Survey, 28% of American men under 30 report not having sex since they turned 18. I was baffled by that and wanted to know what predicts virginity among young men.

Using General Social Survey data, I looked at a long list of possible predictors but found that most factors are unrelated. As you can see below, being younger predicts virginity (not surprisingly). More educated men are more likely to be virgins which cuts against the claim that high-status men are the ones who get sex. (Income and job prestige were not predictive.)

The GSS doesn't have many personality-type questions, so I wasn't able to look at traits like introversion or social awkwardness, but if you've got other ideas for unconventional variables, let me know. 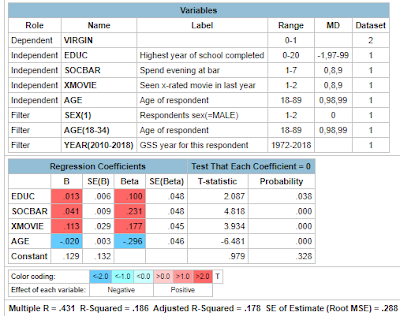 To answer this question, I calculated mean IQs for all self-described whites by the country they said their ancestors came from. Only people born in the US are included since immigrants are at a disadvantage on a vocabulary test (the measure of IQ used here). Here are the results:

It looks like many of these people are racially mixed. They label themselves as white but often have some non-white ancestry. The mixed groups that do not have low mean IQs are self-described whites whose ancestors came from east Asian countries--Japan, China, or the Philippines.

UPDATE: The mean IQ for self-described whites whose ancestors are from east Asia is 99.8.