Feminism is a form of liberation that should make you happy, right? Wrong. Here is the relationship among white women between being happy and voting for Hillary in 2016 (GSS data):

Women who voted for Trump are significantly more likely to be very happy. Marriage is probably the reason why: married white women tend to vote Republican, and married women are happier. Look: 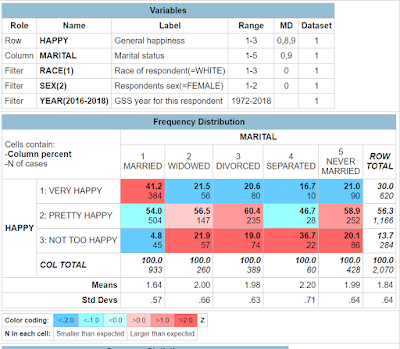 Gloria Steinem famously said, "A woman needs a man like a fish needs a bicycle." A fish doesn't need a bicycle unless she likes being happy.
at July 14, 2020 7 comments:
Email ThisBlogThis!Share to TwitterShare to FacebookShare to Pinterest
Labels: Feminism, Happiness, Liberation, Voting, Women

This interesting new study of between 76 and 179 countries (it varies by the model estimated) finds that more religious countries are more corrupt. I'm skeptical of their interpretation. They admit the finding is counterintuitive but claim that either religion is the "opiate of the people" so they don't care and are oblivious to corruption, or the corruption drives them to escape in religion (the latter seems more likely). I suspect that race/ethnicity is driving the correlation. For example, Scandinavian people are less religious and less corrupt, while Latin Americans tend to be the opposite. Plus, it's always dicey to draw conclusions about individuals from aggregate-level data.

Let's use individual-level data from the General Social Survey. We'll narrow the ethnic variation by keep the sample large by focusing on whites. Here are the results: 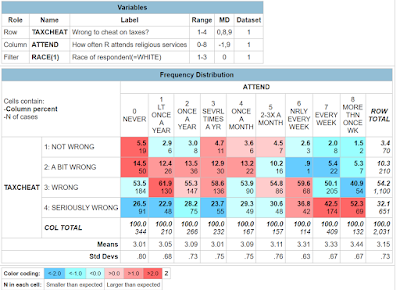 People who attend religious services are clearly more likely to think that cheating on one's taxes is wrong. The correlation (not shown) is .18. Now, this is an attitude question about one kind of illegal behavior, and it's not about behavior itself, but it still supports the view that religious people are not more corrupt than the non-religious.
at July 13, 2020 13 comments:
Email ThisBlogThis!Share to TwitterShare to FacebookShare to Pinterest
Labels: Corruption, Religion, Religiosity, Tax Evasion

Introduction
Suicide is a major public health concern and a leading cause of death around the world. How religion influences the risk of completed suicide in different settings across the world requires clarification in order to best inform suicide prevention strategies.

Methods
A meta-analysis using search results from Pubmed and Web of Science databases was conducted following PRISMA protocol and using the keywords “religion” or “religious” or “religiosity” or “spiritual” or “spirituality” plus “suicide” or “suicidality” or “suicide attempt”. Random and fixed effects models were used to generate pooled ORs and I2 values. Sub-analyses were conducted among the following categories: young age (under 45yo), older age (45 or older), western culture, eastern culture, and religious homogeneity.

Results
Nine studies that altogether evaluated 2339 suicide cases and 5252 comparison participants met all selection criteria and were included in the meta-analysis. The meta-analysis suggested an overall protective effect of religiosity from completed suicide with a pooled OR of 0.38 (95% CI: 0.21–0.71) and I2 of 91%. Sub-analyses similarly revealed significant protective effects for studies performed in western cultures (OR = 0.29, 95% CI: 0.18–0.46), areas with religious homogeneity (OR = 0.18, 95% CI: 0.13–0.26), and among older populations (OR = 0.42, 95% CI: 0.21–0.84). High heterogeneity of our meta-analysis was attributed to three studies in which the methods varied from the other six.

Conclusion
Religion plays a protective role against suicide in a majority of settings where suicide research is conducted. However, this effect varies based on the cultural and religious context. Therefore, public health professionals need to strongly consider the current social and religious atmosphere of a given population when designing suicide prevention strategies.
at July 09, 2020 6 comments:
Email ThisBlogThis!Share to TwitterShare to FacebookShare to Pinterest
Labels: Meta-Analysis, Religiosity, Suicide

This study, using a sample of ~94k teens and young adults, examined the link between religiosity (church attendance and saying religion is important in their life) and drug selling and theft. The researchers found a robust inverse association for various age and demographic groups. The magnitude of the link was considerable for black males and females: the incidence of drug selling and theft was between 1.6 and 3.3 times higher for irreligious blacks compared to their religious counterparts.

Of course, a correlational study can't tell us anything about causation, but this study provides pretty good evidence that one finds more law-abiding blacks at church, and the Church has always been a central institution in the black community.
at July 02, 2020 10 comments:
Email ThisBlogThis!Share to TwitterShare to FacebookShare to Pinterest
Labels: Blacks, crime, Drug Sales, Race, Religion, Theft
Newer Posts Older Posts Home
Subscribe to: Posts (Atom)