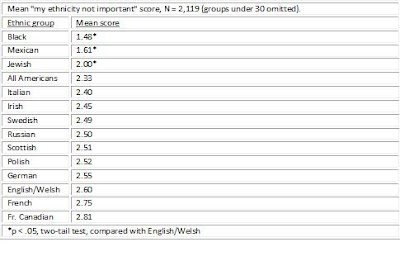 In the comments in the last post, some readers contended that Jews are not ethnocentric. Using the same question I used in the comments section--how important is your ethnicity for your sense of who you are--I calculated the mean score for all American ethnic groups with at least 30 people. Answers ranged from "very important" (1) to "not at all important" (4), so high scores indicate low ethnocentrism.

The table shows that of the 13 groups big enough to measure, Jewish Americans are the third most tribalist group, behind only blacks and Mexicans Americans. The difference between Jews and those of English descent (the comparison group) is statistically significant at the 95 percent confidence level. The standard deviation is 1.14, so the English/Jewish gap is slightly over 1/2 of a standard deviation.

Irish and Italian Americans, thought by some in the previous post to be as ethnocentric as Jewish Americans, do not differ significantly from Americans of English descent. The gap between Jews and the Irish is 39% of one standard deviation; the Jewish/Italian gap is 35% of one SD.

Jews are significantly less ethnocentric than blacks, but their mean does not differ significantly from that of Mexican-Americans (p < .05, two-tail test).  (I wouldn't be surprised if this comparison would become significant if N were increased).