More on race and altruism 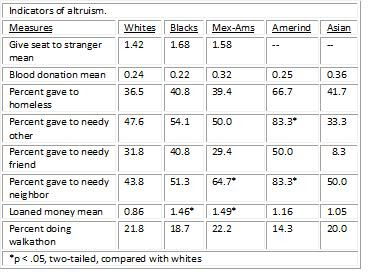 In The 10,000 Year Explosion, Gregory Cochran and Henry Harpending claim that agrarian living selected for stinginess. A farmer who gave away all his seed was left with nothing to plant in the spring.

This might explain results from a GSS analysis described in the last post. I've reproduced the findings in the table above and added estimates for Amerindians and Americans of Chinese and Japanese descent (combined into an "Asian" category).

With their deep agricultural histories, you would expect whites and Asians to hold on to their money more tightly. It looks like they do. While they don't seem to differ on non-monetary forms of charity like participating in walkathons, they are less likely to give or loan individuals money. Compare whites and Asians to American Indians, for example. Twice as many Indians as whites have helped a needy neighbor.

Keep two things in mind, however. Pure opportunity might explain these numbers. NAMs associate with more needy people than whites or Asians. (On the other hand, whites and Asians have more money to give). Also--sample sizes are small for everyone except whites.
at December 19, 2009
Email ThisBlogThis!Share to TwitterShare to FacebookShare to Pinterest
Labels: Agrarian Past, Altruism, Race