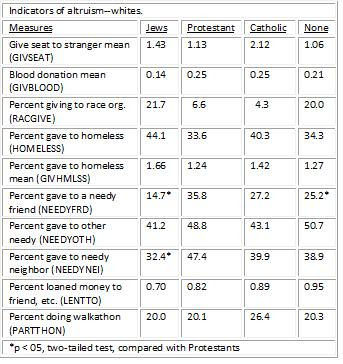 In my earlier posts on ethnocentrism among Jewish Americans, commenters provided estimates from GSS data suggesting that Jews are altruistic. In using the term ethnocentric, I wasn't implying that Jews are uncaring toward others; only that they have affection for their own. Their liberalism despite great wealth leaves me with the impression that they care about non-Jews.

I calculated means and percentages for all the GSS questions I could find that tap general altruism. Generic questions about charitable contributions are not good since, for all we know, people are donating money to within-ethnicity causes. Even the questions listed above have problems. Jews are concentrated in urban areas, so questions regarding giving up a seat on a bus or giving money to a homeless person will favor them. (In the question on giving up a seat, I limited it to people living in cities with at least a million people).

On the other hand, non-Jews are advantaged in questions about giving money to needy friends or neighbors. As a wealthier group, Jews are less likely to have friends or neighbors in need. The same could probably be said of some friend, acquaintance, or family member in need of a loan (LENTTO).

Participating in walkathons or donating blood are better questions: percentages seem to be the same for walkathons, while non-Jews might be more likely to donate blood.

Jews, along with those having no religion, certainly shine in terms of giving money to racial organizations. I imagine this is mostly black orgs like the UNCF. I'd chalk this up to greater liberalism.

Judge the numbers as you will: I see little evidence here that Jews differ from others on general altruism.
at December 16, 2009
Email ThisBlogThis!Share to TwitterShare to FacebookShare to Pinterest
Labels: Altruism, Jews