There was an Twitter dust-up recently when Nassim Nicholas Taleb used his statistical skills to trash IQ studies.  Two of his criticisms -- if I understand him correctly (he doesn't write so regular folks can understand because he is an elitist) -- are that: 1) IQ only does a good job distinguishing the mentally challenged from those in the normal range of intelligence; and 2) IQ becomes particularly useless at predicting important outcomes (like income) at the high end of the distribution.

I looked at the relationship between the General Social Survey's simple measure of IQ -- a vocabulary quiz -- and the respondent's household income in 1986 dollars. The vocabulary score is the number correct out of 10 questions (sample size = 27,530): 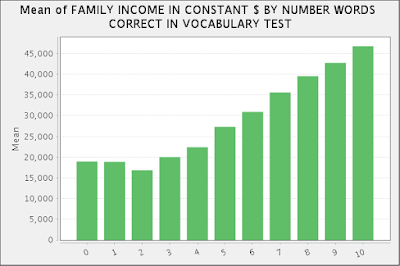 According to GSS data, Taleb is wrong on his first point and half wrong on his second. See how IQ does not predict income much at all for the lowest four IQ levels.

But it does do a pretty good job of predicting income from levels 3 through 10. Within this range, there is a straight, stair-step increase in income as one moves up in IQ.  This linear relationship does not fade or disappear at the highest levels of intelligence, as Taleb says it does.

On the other hand, the data support Taleb on one important point (you can't see the following on the graph): the problem of heteroscedasticity (unequal variance). For each IQ level from 0 to 4, the variance in income is not high. For example, people at the 0 level do not vary from each other much in terms of income: they're generally pretty poor. Once you reach level 5, people start to diversify more: people are increasingly all over the map in terms of income. And this tendency increases through level 10--the level with the greatest dispersion in income. In other words, while the smartest people have the highest average income, it is a very diverse class of people. Some earns tons of money, others not much.

So, a high IQ seems almost necessary to earn a big income, but it is far from guaranteeing it.

UPDATE:  The data reminds me that income -- in the US, at least -- is hard to predict because there is so much variation.  Liberals like to refer to it as inequality.  Probably no variable predicts income with a great deal of precision simply because people are all over the map in terms of how much they make.  Taleb takes advantage of that fact when he criticizes IQ.

at March 04, 2019
Email ThisBlogThis!Share to TwitterShare to FacebookShare to Pinterest
Labels: Income, IQ