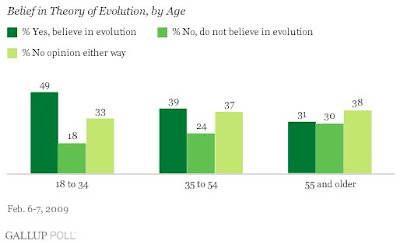 In honor of Darwin's birthday, Gallup conducted a poll and found all sorts of discouraging things, like how only 39% of Americans accept the theory of evolution. I'd rather focus on the positive part that younger people are more likely to believe it than older people. There is an 18 point gap between the youngest and oldest groups.

I can see this in my own family. Despite my best efforts, both parents are skeptical, but all the kids accept it. On the other hand, I get a lot of resistance in the classroom from students. Many students don't deny it's true, but they make yucky faces if you use it to explain human behavior.
at February 13, 2009
Email ThisBlogThis!Share to TwitterShare to FacebookShare to Pinterest
Labels: Evolution