Democrats love to tax the crap out of you, and skip on paying their share 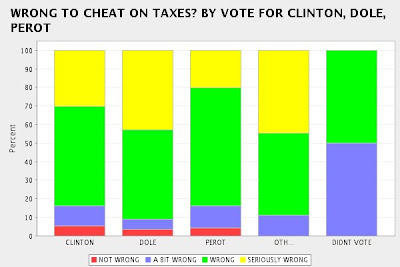 From Half Sigma's blog:

Timothy Geithner, and now Nancy Killefer and Tom Daschle. All tax cheats. It’s funny how these Democrats are happy to spend other taxpayers’ money on social programs, but not so eager to actually pay taxes themselves.

Amen. I wish religious people said amen repeatedly so I could do it now. Let me add Al Franken--who has also been accused of failing to pay taxes. (Let's not forget Bill Richardson's shenanigans too).
The General Social Survey asked 733 Americans if they thought cheating on taxes is wrong, and also asked who they voted for in 1996. The graph shows that 16.3% of Clinton voters think tax evasion is not wrong or a little bit wrong, compared to 9.1% of Dole supporters.
at February 04, 2009
Email ThisBlogThis!Share to TwitterShare to FacebookShare to Pinterest
Labels: Political Orientation, Tax Cheating