Recently, I documented that of the four racial groups examined -- whites, Hispanics, Asian Indians, and East Asians-- four showed a positive correlation between lighter skin and IQ.  But what about blacks?

This graph shows mean IQ for blacks born in the US at increasing dark skin tones (as rated by General Social Survey interviewers, N = 658).  I am using skin tone as a rough measure of the degree of European ancestry: 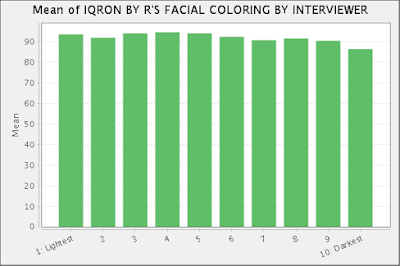 So blacks with more European ancestry tend to have higher IQs. The explanation that light-skinned blacks receive better treatment than dark blacks is unconvincing.  When someone of another race encounters a black person, you say "black person" to yourself, not "light-skinned black person."  And anyway, there's no evidence that poor treatment makes somebody dumber.  If it did, Jewish Holocaust survivors would be morons, not people with above average IQs.