Data: Moderately religious whites are the most ethnocentric

We saw in the last post that religious blacks, compared to their irreligious counterparts, say their racial identity is more important to them.  Does this pattern apply to whites?

I suspect the General Social Survey question is not interpreted the same by whites as blacks. It asks about ethnic identity, and I would guess whites are more likely to respond with something like, "Sure my Irishness is important."  Only a certain percentage probably interpret the question racially.

Anyway, here's what we get when we calculate mean ethnocentricity scores by church attendance (N = 2,167): 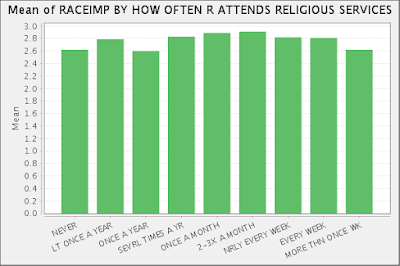 Being ethnocentric peaks for whites who attend 2-3 times per month.  By contrast, it bottoms out among those who never go to church AND those who go more than weekly.

Racially-minded whites often say that Christianity is a problem since it encourages color-blindism, but that only seems to be the case for the small share of highly religious people.  And the complete absence of religious activity is correlated with less ethnocentrism.  Moderate religiosity seems to go hand-in-hand with ethnic loyalty.

By the way, the difference between the top and bottom group is roughly 40% of standard deviation, so it's a moderate-size gap.

NOTE: Notice how I tend to handle these topics as a scholar should, while actual scholars do not.  I use fairly neutral terms like "ethnocentric" for both blacks and whites, while elite scholars use terms like "black pride" and "racial self-esteem" for blacks, and when the same question is analyzed for whites, terms like "hatred, "racism," "white supremacism," and "hate groups" are used. These "scholars" are frauds and should be ashamed of themselves.
at January 17, 2019
Email ThisBlogThis!Share to TwitterShare to FacebookShare to Pinterest
Labels: Ethnocentrism, Religiosity, Whites