The General Social Survey asked blacks on a scale from 1 to 4 how important their ethnicity was to their sense of who they are.  Here is a graph showing means scores of this question by political orientation: While ethnocentrism does not rise smoothly with conservatism, blacks who describe themselves as extremely conservative are the most black-centric group.  So don't think that a black right-winger wants to forget about race. 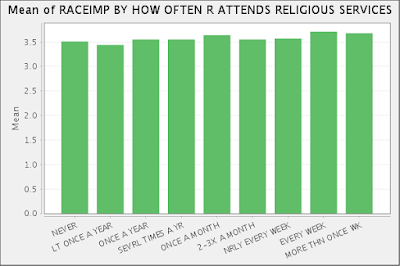 The effect is not strong, but there is a tendency for more religious blacks to focus more on race identity, rather than the fact we are all children of God.

How do we explain this (admittedly weak) pattern?  (Keep in mind that mean ethnocentrism is so high for blacks of any category, there isn't much variation to explain.) Perhaps it's due to a liberal tendency to see oneself as a citizen of the world, while conservatives might be more comfortable with local loyalties.
at January 16, 2019
Email ThisBlogThis!Share to TwitterShare to FacebookShare to Pinterest
Labels: Blacks, Ethnocentrism, Political Orientation, Religiosity