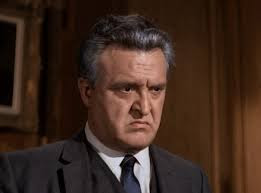 This study shows some evidence for what some contend; that northern Europeans tend to be more intelligent than Mediterranean people. In a recent analysis of General Social Survey data, I found little evidence that IQ varies among whites by which European country your ancestors come from.

As an alternative approach, let's see if there is a correlation between skin tone, as rated by interviewers, and IQ among self-identified whites. Keep in mind IQ is measured with a vocabulary test.

It turns out the the correlation for a sample of 3,162 whites is -.13, meaning there is a slight tendency for pasty whites to be smarter than olive-skinned whites.

Don't accuse me of bias: While my ancestry is 100% northern European, people always ask me if I'm Italian or something. My maternal grandfather was a dead ringer for Vincent Gardenia ("You've got three kinds of pipe").
at December 10, 2018
Email ThisBlogThis!Share to TwitterShare to FacebookShare to Pinterest
Labels: IQ, Northern vs. Southern Whites, Whites