I recently presented evidence that non-whites tend to be clannish because they are non-white, not because they are outnumbered. But I also mentioned that there is variation among whites. This is consistent with bloggers hbd chick  and JayMan who stress that not all Europeans are the same, and that the Hajnal line divides them.

Using the General Social survey question ("When you think about yourself, how important is your ethnic group membership to your sense of who you are?" 1 = not at all, 2 = slightly, 3 = moderately, 4 = very) I calculated the mean score for various white groups:

To get a sense of the variation, the difference between Orthodox Jews and French Canadians is over one standard deviation--a very large difference.

So whites are more ethnocentric if they are: older, politically conservative, and if their families came from outside these lines: 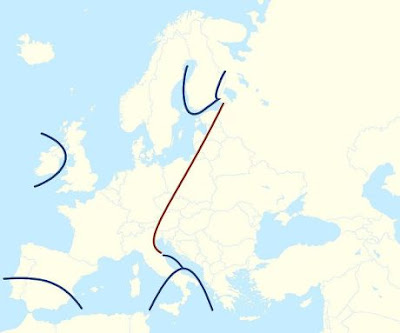 It's pretty amazing that Americans whose families left Europe a long time ago still show some of the clannishness found in the Old Country.