CDC: American fertility is now as pathetic as Europe's

The figure below is taken from an October 2018 CDC report. It shows large drops in US fertility over the past decade. Whites from counties of all sizes are now well below replacement. White women in large metro areas average about 1.6 kids each. These are pathetic European levels. People in the developed world want their trips to Aspen, not the hassle of raising kids. And don't give me the excuse that people can't afford kids. My grandfather had eight children on a maintenance man's wage. They lived simply, that's all.  I have six kids, and our household income is average.

And if you're celebrating because this is a sign of progress toward a sustainable global population, think again. Current trends just mean a shift away from whites and Asians and toward blacks, God bless them. We need thriving scientific populations, not exploding, perennially poor ones.

By the way, it's ironic, but Michelle Obama might save the day. She is pushing for much more female education in Africa. What works in one population doesn't necessarily work in another, but if history is any guide, nothing dries up a woman's uterus better than staying in school. 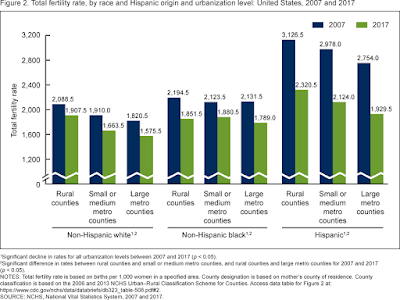