Data: The family size split between the religious and secularists has grown

A recent study of the Canadian General Social Survey shows an increasing split in the fertility of religious vs. non-religious women.  From the paper: 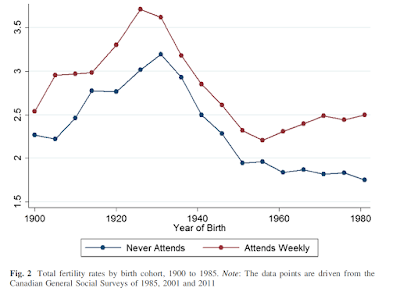 For more than 100 years, women who attend church weekly have had more children than never-attenders. But the split accelerated from the 1950s to recent times. (More recent cohorts aren't finished yet.)

One standard explanation is that religious women use less birth control, but many religions, even conservative ones like Mormons, are fine with birth control, just not abortion. I imagine religious women are less likely to abort an unwanted pregnancy because of beliefs against it.  Religion also tends to stress the importance of motherhood. Mary, the feminine ideal, was first and foremost a mother.

In addition, research suggests that religious people tend to score higher on the trait of agreeableness and to a lesser extent, conscientiousness and emotional stability. Agreeableness, which includes trust, compliance, and tender-mindedness, predicts investment in church and family life.

This is one reason I'm a religious person (in addition to being pro-science). I feel at home with people who are pro-life in the broad sense. Secularism seems to me the road to death.
at October 24, 2018
Email ThisBlogThis!Share to TwitterShare to FacebookShare to Pinterest
Labels: Atheism, Fertility, Religiosity