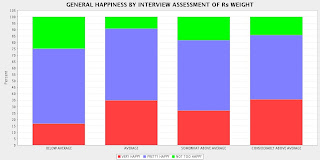 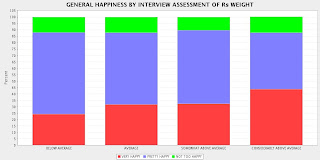 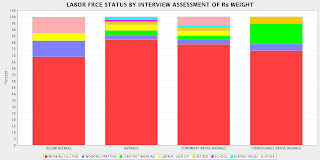 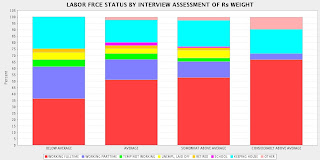 
The Steveosphere has been chatting about fat, so I thought I'd chime in. There are two ideas I wanted to test: 1) that fatter people are happier; and 2) that they're lazier.

General Social Survey interviewers looked over respondents and recorded whether they thought they were below average, average, above average, or considerably above average weight. I omitted non-whites since their numbers were too small.

The top two graphs show how happiness varies with weight. Among men, the skinny ones are not as happy. Men of average weight are happiest, but the fatties are pretty close.

Among women, the trend is clearer: the fatter, the happier.

Now, on the laziness question, I picked work status for people from the age of 30-55. (Next time, I might look at other indicators).

Looking at the third graph, the skinny guys are least likely to be working full-time; the really fat dudes are second.

Once again, weight is more important for women. As the rotundness increases, so do the hours at work. Notice how the skinnies have the most homemakers. They probably used their thinness to bag them a productive husband. (Lots of thin part-timers too).

So, the data here do not support the idea that fat people are lazy and miserable. Perhaps happy people worry less about their weight. The world is a good place whether I'm narrow or wide.

What's up with thin men? Not happy because they're too slight--a feminine quality? More neurotic?

I imagine that more fat women need to work because they don't have a man to support them, or because they must bring more income to the marriage bargain to compensate for being unattractive. Or they're just lower-income types and need the money more.
at December 15, 2008
Email ThisBlogThis!Share to TwitterShare to FacebookShare to Pinterest
Labels: Happiness, Obesity, Work Ethic 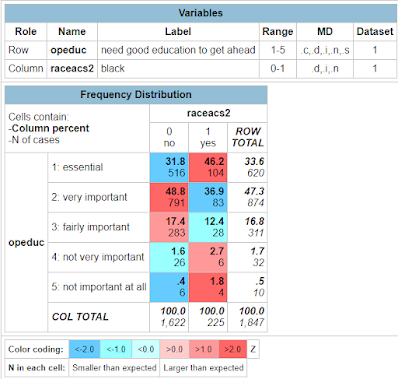