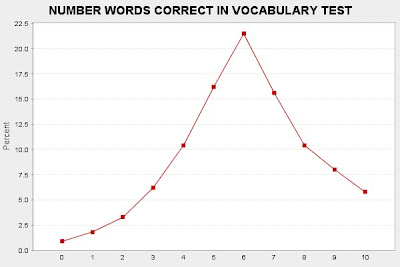 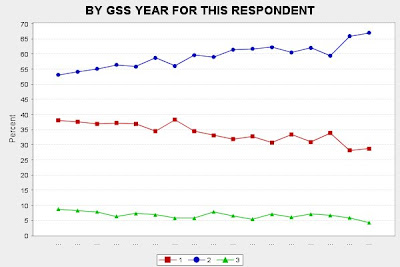 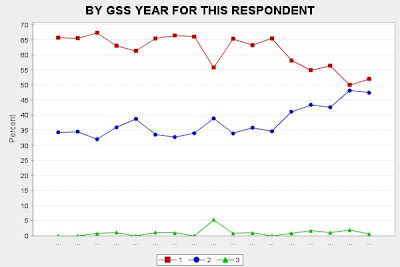 Glancing at GSS data on IQ (based on a vocabulary test) it looked to me like scores, for both blacks and whites, have been moving away from the extremes over the past 35 years. A closer look shows that I was more or less right. The bottom two graphs above are from 1973 to 2006. The top graph shows that percent with a particular score--6 is modal. To smooth the trends, I merged those with low scores (0-5); those with average scores (6-9); and those with perfect 10s. (I decided on these categories based on what appeared to move together over time). On the graphs, 3 (or green) is for the high group, 2 (or blue) for the middle, and 1 (or red) for the low group.

For both races, the low IQ group has shrunk while the middle group has grown, but this upward movement for blacks appeared only after 1994. It is not clear if the prevalence of high IQ blacks has increased, but the number for whites has dropped from 9 to 4%.

at August 27, 2007
Email ThisBlogThis!Share to TwitterShare to FacebookShare to Pinterest
Labels: IQ