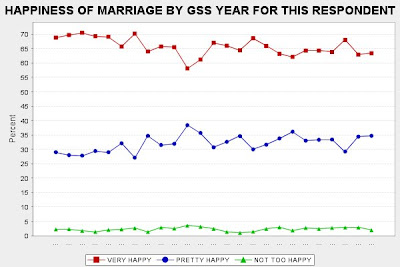 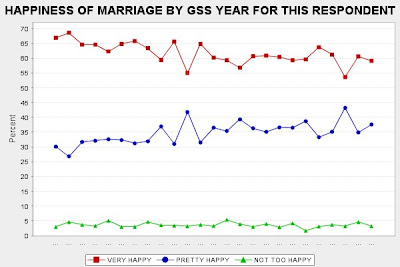 Liberals told us in the 1960s that America needed no-fault divorce to allow unhappy people to split up. By making divorce easy, the average satisfaction of married people would rise as the unhappy ones joined the ranks of single people. Well, that seems perfectly rational, right, so California passed a no-fault divorce law in 1970--a trend which quickly spread to the rest of the country. GSS data from 1973-2006 shows us that their prediction was incorrect. The top graph is for married men, and the bottom is for women. For both groups, the percent who are very happily married has dropped about five percent points over the past 35 years. I plan to post several analyses on family matters over the next week or two, so I'll comment on this later.
at August 20, 2007
Email ThisBlogThis!Share to TwitterShare to FacebookShare to Pinterest
Labels: Happiness, Marriage