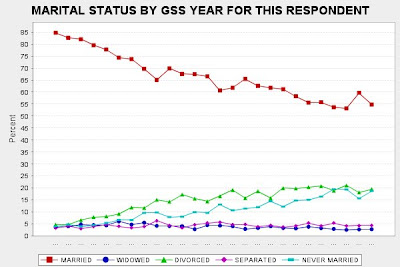 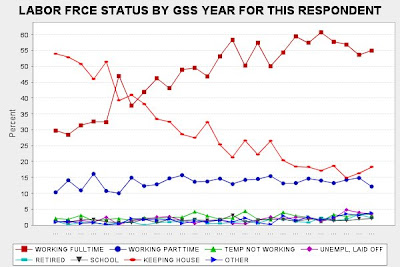 Feminists have been telling us for decades that one's power in a marriage depends on one's personal income, and that women need to be employed to create equality between spouses. This equality, in turn, will lead to more mutually satisfying relationships. The lower graph is the employment status for women ages 30-60 over the period 1972-2006. Full-time employment has grown from 30 to 55%, while being a housewife has plummeted from 55 to less than 20%. While more and more women have moved into the workforce, women's marital happiness has slipped a little over this period (shown in the previous post). The top graph shows that, instead of improving marriage, growth in female employment has paraleled a decline in marriage--more divorced and never-married people. As we saw in the last post, rational predictions about the family made by liberal experts turned out to be exactly wrong.