Does it pay to playboy? 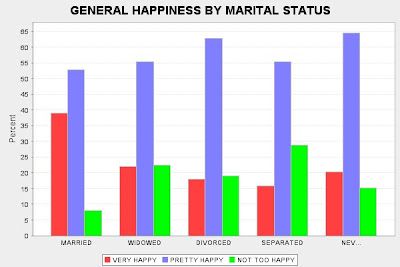 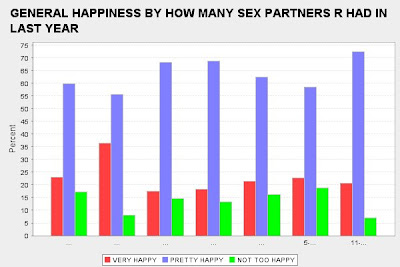 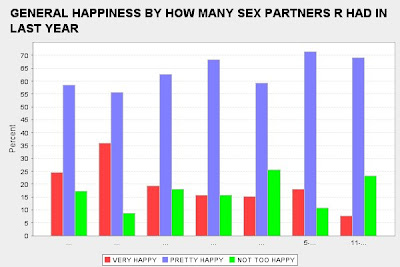 Continuing the theme of being misled on family matters, the Sexual Revolution spread the message that uninhibited sex is essential to psychological health and happiness. Men, of course, have been only too happy to embrace this idea, especially the playboy version of it. Monogamy and marriage are cages, right? Like the one bull said to the other as they looked down on a herd of cows: why run and grab one, when you can strut down and have them all?

Well, GSS data show us that this kind of attitude doesn't deliver. The bottom two charts display happiness by the number of sexual partners had in the past year. At the very left are celibates, then one partner, then two, etc. The last two categories are 5-10 partners and 11-20. (21-100 were left off due to insufficient cases). For both men and women, people with one parter are much more likely to be very happy than any other group. (I'll grant that the most promiscuous male group is as low on "not too happy" people as among the monogamous group, but the sample size is small, and the rest of the multiple-partner groups are higher). Contrary to what the sexual experts have been telling us, celibacy does not make men less happy than promiscuity, and celibate women have a higher percent in the "very happy" group than in any multiple-partner group.

Of course, much of the happiness reported by monogamous people is connected to the fact that they are married. The top chart shows that married folks are much happier than people in all other statuses, including the wild and free category of never-marrieds. Prison turns out to be a refuge.