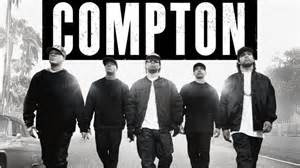 I never watch black movies because they're no good.  It's not me saying that. Critics hate black movies. How many times have I seen them, as a group, pan Tyler Perry movies on Rottentomatoes.com?  I think it's close to 100%. Even though their politics are the opposite of mine, movie critics are smart, and I often like what they like, so I just watched Straight Outta Compton. Quentin Tarantino is right that biopics are an inferior genre. At least there was lots of violence, and that always helps.

But what struck me was the following question: I'm no historian, but in the history of world, have we ever seen the top musicians of a genre made up of a class of common criminals? I guess gypsies might be a good example. Perhaps criminals and musicians share common traits like debauchery.

The movie doesn't shy away from the fact that these people are simply recidivists with rhythm. I mean, Charles Manson learned how to play guitar in prison, and even recorded some songs with the help of Dennis Wilson of the Beach Boys. Singing to his followers was a big thing in the Manson cult, but do we make reverential movies about him?

at February 20, 2016
Email ThisBlogThis!Share to TwitterShare to FacebookShare to Pinterest
Labels: Rap Music