Non-whites saving us from the socialism of young white idiots! 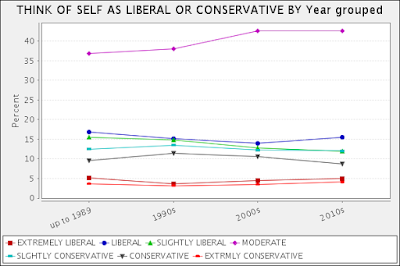 In an earlier post, Jayman wrote that non-whites shouldn't be characterized as liberal but as more likely than whites to vote for Democrats. This graph shows self-descriptions for non-whites. As Jayman suggests, a plurality--more than 40%--describe themselves as moderates, and that number has grown a bit over the past 2 decades. Twenty-one percent currently say liberal or very liberal.

Maybe the large number of non-white moderates helps explain the strong support for Hillary. Non-whites seem to be saving us from the socialism of young white idiots!
at February 22, 2016
Email ThisBlogThis!Share to TwitterShare to FacebookShare to Pinterest
Labels: Non-whites, Voting