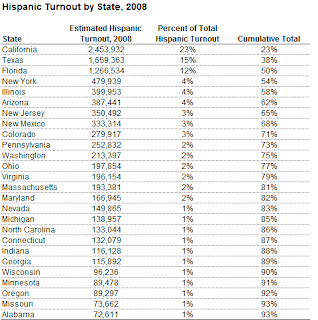 Would someone explain why the national media goes on endlessly about the critical importance of the Latino vote? According to this 538 table, Hispanic might is really only felt in states that are clearly blue (ie., California) or clearly red (i.e., Texas). Very small percentages of voting Hispanics in 2008 were in swing states. Focusing on this year's key states, the share of all Hispanic voters was one percent in Nevada and North Carolina. It was two percent of all Hispanic voters in Ohio and Virginia. It was only three percent in Colorado. The share is large only in Florida, but the state is not filled with Mexican Americans demanding amnesty for their illegal co-ethnics. Plus, come hell or high water, Latinos vote 2-to-1 for Democrats, so they are not swing voters but part of the Democrat base.

I watch the polls very closely, and Romney is doing surprisingly well in states like Pennsylvania, Ohio, Wisconsin, and Michigan (or more precisely, Obama is doing surprisingly badly, especially when one considers the auto bailout). All the Hispandering, in addition to pandering to homosexuals and women who want free birth control, seems to be causing a reaction among working-class whites in the Rust Belt. Blue-collar whites vote in much larger numbers than Latinos in swing states, but Big Media doesn't give a shit about them.