In the comments of the last post, it was stated that smart people are less religious. Let's remind everyone what the GSS says (sample size = 4,784, surveys 2000-2010, whites): 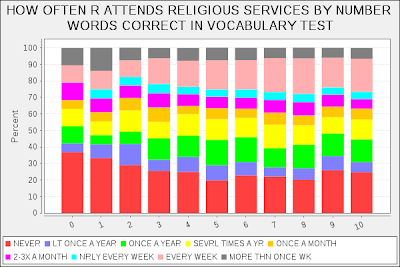 Scoring six out of ten on the vocabulary test is the mean. Whites in the highest IQ category are slighly more religious than average. Another way of looking at the question is the Pearson correlation. It is .01--overall the two variables are unrelated. (GSS is not able to isolate really smart people, so we can't talk about those folks.)

On the other hand, I know I've got some readers who think of religiosity in terms of belief rather than attendance. If this is what you have in mind, there is a weak negative relationship between intelligence (as measured by the vocab test) and confidence in the existence of God: it is -.14 (p < .01, sample size = 6,849 whites).
at May 19, 2012
Email ThisBlogThis!Share to TwitterShare to FacebookShare to Pinterest
Labels: IQ, Religiosity