In the recent post on the fertility of never-married women, Audacious Epigone suggested I look at trends over time. I calculated the mean number of offspring for white women ages 40 to 59 who completed at least 16 years of education:

From the 50s through the 70s, educated, never-married white women had no children. Since that time, perhaps one out of six has a single child. The trend suggests that if all educated white women never got married, the numbers of educated white Americans would dwindle rapidly. 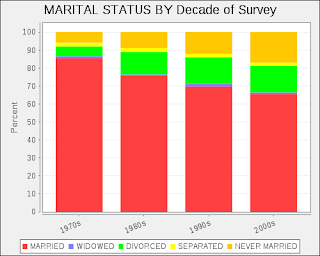 Singlehood among educated white women has been increasing for several decades but is still short of twenty percent.
at May 13, 2012
Email ThisBlogThis!Share to TwitterShare to FacebookShare to Pinterest
Labels: Education, Fertility, Marital Status, Whites