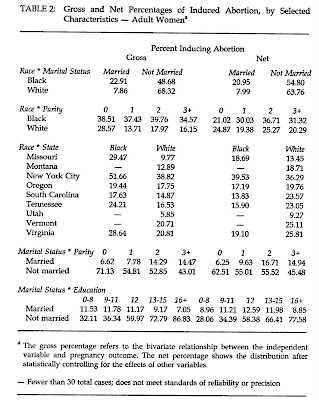 This table reports the results of an analysis of the outcomes of more than 500,000 pregnancies (Social Forces. 1991. 69:1121). The numbers under the heading "Gross" are the percent of women in a particular category who opted for an abortion rather than giving birth to the child. Numbers under the "Net" heading are more important since they are the results after controlling for relevant variables.

I'm interested in the estimates for various levels of education--a proxy for intelligence. You can see that, whether we look at adjusted or unadjusted numbers, the probability of abortion for unmarried women rises dramatically with education. Given a pregnancy and focusing on the adjusted figures, a single women with at least a bachelor's degree is 2.8 times more likely to abort the child than someone who didn't get past the eighth grade.

The chance of an abortion for married women is curvilinear: it reaches its peak of 12.59% among women with 12 years of schooling. Compared to abortions by married women, those gotten by single women are more important since they are by far more common (according to the study, 76% of all abortions are by single women).

So this huge and carefully done study indicates that abortion as it is practiced in the Unites States is dysgenic.
at November 10, 2009
Email ThisBlogThis!Share to TwitterShare to FacebookShare to Pinterest
Labels: Abortion, Dysgenics