Sexual behavior and number of kids

What Roissy calls “beta behavior” evolved because it’s the most successful reproductive strategy in a civilized society. When pre-marital and extra-marital sex was very strongly discouraged by society, being able to talk a girl into bed didn’t mean spreading your genes as much as it meant being forced to marry her at the end of a shotgun (or crossbow or sword or whatever weapon was used back then), or even worse, killed by her angry relatives, put in jail for the crime of adultery, etc.

Modern society is now reverting to a more primitive form, and the beta behavior bred into humanity over many thousands of years will much more quickly be bred out.

Good stuff, but it looks like the data don't really support the idea that, compared to, say, 50 years ago, promiscuous men are producing more babies, while more monogamous men are failing to reproduce. Audacious has shown that men with only one lifetime sexual partner have the largest families. This is true for all races, and the correlation across categories is strong (.57).

How many female sexual partners you've had since 18 was asked on the General Social Survey twelve different years from 1989 to 2008. Men of all ages were asked the question, so a skeptic like Whiskey might argue that the sample is loaded with old men whose prime reproductive years were during an earlier era where sexuality operated differently. So let's look at men ages 30 to 39 from this decade. (We need to choose men who are old enough to have demonstrated their sexual pattern). I focus on white men since the black sample size is insufficient. 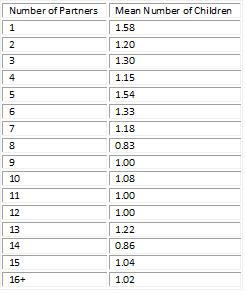 The pattern is the same as that observed by Audacious: the group with the most kids are men who've only had one sex partner since age 18. And these men were in their teens in the 80s and in their twenties during the 1990s, so they do not come from an era where out-of-wedlock births were uncommon.

Next, we'll look at trends to get a sense of the future.
at September 01, 2009
Email ThisBlogThis!Share to TwitterShare to FacebookShare to Pinterest
Labels: Family Size, Sexual Behavior