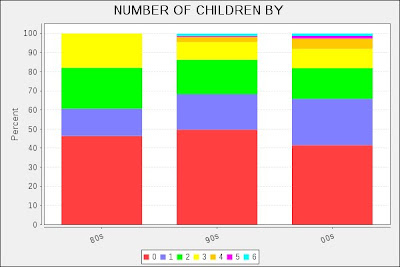 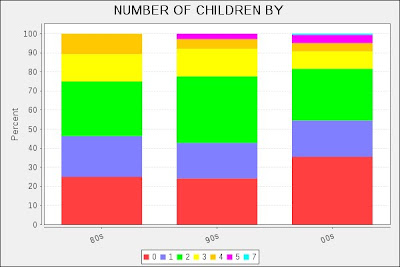 These graphs show the trends in number of offspring over the past three decades for white men ages 30-39 having a lifetime total of 20-700 sexual partners (Alphas) and those with only one or two (Betas). There are only about 30 cases for each group in the 1980s, so we should pay more attention to the last two decades. First, it's clear that Alphas were more likely to be childless prior to this decade, but the gap has almost disappeared. Now, Alphas are more likely than Betas to have one kid but less likely to have two. Twenty-percent of both groups have three or more.

If we look at means instead, we get:


The story is similar here. Betas average more kids, but the gap is narrowing. Standard deviations (not shown) are increasing for both groups too, indicating greater variation in this decade.

So the two groups are converging: more Betas are now childless, while Alphas are reproducing at greater numbers. It looks like fewer Betas are able to find a partner now, and perhaps women are becoming more willing to have an Alpha's baby. Single motherhood is becoming more common and acceptable for whites, so women might be more willing to risk having a baby with an unreliable man.

Predictions are a very dicey business, and Alphas are still less prolific, but if current trends continue, Alphas could surpass Betas in the baby race.
at September 03, 2009
Email ThisBlogThis!Share to TwitterShare to FacebookShare to Pinterest
Labels: Alphas and Betas, Social Trends