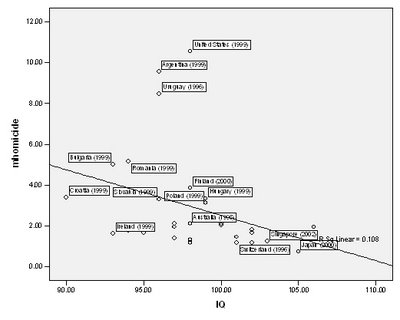 Using Richard Lynn's data on national IQ and WHO data on male homicide victimization, I calculated a correlation of -.46 across 30 countries. The scatterplot is shown above. Argentina, Uruguay, and especially the United States are well above the regression line. Black Americans might raise homicide levels more than they lower average IQ, but murder rates among white Americans are higher than expected. This has been attributed to any number of things: frontier cultures that became violent due to a non-existent or ineffective criminal justice system (i.e., the Scots-Irish and the Wild West); immigration selecting for restlessness; and handy guns, which embolden criminals and turn a fight into a murder.
at September 19, 2006
Email ThisBlogThis!Share to TwitterShare to FacebookShare to Pinterest