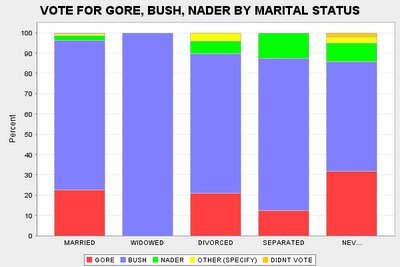 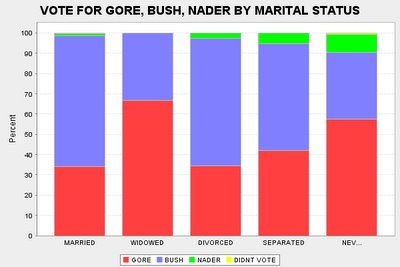 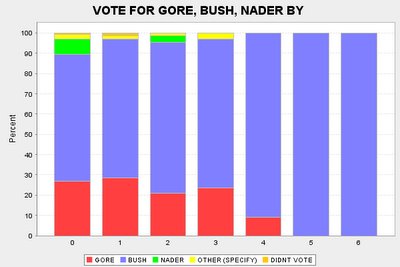 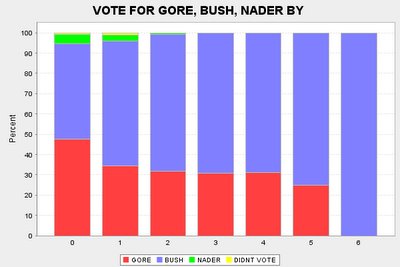 Steve Sailer wanted to know what General Social Survey (GSS) data say about his "affordable family formation" thesis that inexpensive housing allows young, white people to get married, have children, which then convinces them to vote Republican. Preliminary analysis showed that the pattern of voting Republican as family size grows is sharper among younger, white Americans, so the numbers shown here refer to people ages 18 to 45, as of 2004.

First, I looked at never married people, and the first graph shows that white, married men were more likely to vote for Bush than their never-married counterparts. This tendency is even stronger among women, as shown in the second graph--a majority of never-married women voted for Gore.

Now turning to the question of family size, the third graph shows that the percent of men voting for Bush in 2000 increases with the number of children they have: few men with large families voted for Gore. For women (graph 4), the big shift occurs between those with no kids, and those with one or more children. Almost one-half of white women with no children voted Democrat, but only about 30% did if they had any children.

Steve was also interested in the mean number of children at home for whites of different political orientations. Once again, patterns are sharper among younger whites who have kids living at home, so I focused on them:

It is clear that young, white conservatives have bigger families than their liberal counterparts. From these data, it is unclear what is driving what: family life may move people right, or conservatives might be more likely to choose marriage and large families. One line of evidence that supports Steve's idea is that these patterns seem to have emerged in the last decade. Among empty-nesters, white liberals have almost as many kids as conservatives. The large family/voting Republican correlation has grown in the last decade, perhaps fueled by trends in housing prices.

The GSS data are also consistent with the state-level data that Steve analyzed which show that red states have cheap housing prices and white families with lots of babies. That survey data would show the same pattern at the individual-level as data at a macro-level is significant.

More later....
at September 04, 2006
Email ThisBlogThis!Share to TwitterShare to FacebookShare to Pinterest