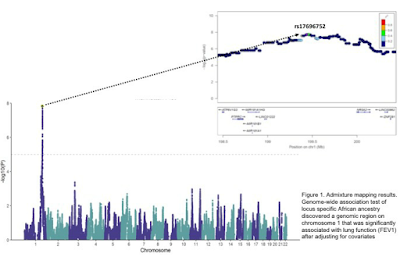 Introduction: In the U.S., asthma disproportionately affects urban minority populations, with Puerto Ricans showing the highest asthma prevalence 16.1%. However, what causes high asthma
prevalence among the Puerto Ricans is not very well understood. The varying proportions of African, European, and Native American genetic ancestry in Puerto Ricans can be leveraged to identify genetic determinants of clinically significant measures and outcomes such as lung function and asthma severity. We have previously demonstrated that genetic ancestry is associated with lung function.

Methods: In this current study, we sought to discover potential causal genes that may be associated with lung function in Puerto Rican islanders by applying admixture and fine mapping methods. A genome-wide admixture mapping study of lung function was conducted in 841 Puerto Rican children with and without asthma, who were recruited from Puerto Rico. After mapping admixture segments, we fine-mapped the genomic region using whole genome sequencing data. RNA-seq and eQTL mapping were used to elucidate underlying biologic links between genetic variants and lung function.

Results: The association test between local genetic ancestry and forced expiratory volume in 1 second (FEV1) identified a strong admixture mapping peak on chromosome 1q32, indicating that each African ancestry allele was associated with a 0.13 liter decrease in the volume of exhaled air [95%CI: -0.08 to -0.18, p-value=4.90×10-8]. Three variants identified from the fine-mapping analysis were eQTL of TMEM9 gene in nasal epithelial cell. The minor allele of the variant associated with TMEM9 gene (rs10920079) tracked with African ancestry and was associated with significantly decreased lung function and TMEM9 gene expression. TMEM9 was inversely correlated with proinflammatory cytokine IL-6 and IL-1β gene expressions.

Conclusion: The results from admixture mapping discovered variants that were associated with decreased lung function. Functional annotation and validation with RNA-seq and eQTL mapping indicate that these SNPs may be involved with regulating cytokine production, which may influence the lung function of Puerto Ricans.
at May 08, 2020
Email ThisBlogThis!Share to TwitterShare to FacebookShare to Pinterest
Labels: Asthma, Disease, Genes, Puerto Ricans, Race