Racial identity as revealed by the GenForward Survey

A reader at Reddit pointed me to this table from GenForward, an online survey of young Americans (ages 18-34). It's associated with the University of Chicago. You can see the question they asked about identity and the results by race: 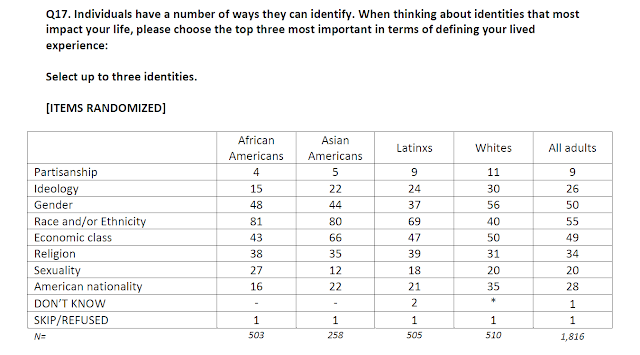 The results are consistent with my analysis GSS data of adults of all ages, but the identity politics is seen more sharply here among young Americans.

Race is most important for nonwhites. Race (probably some of it ethnicity) is 3rd most important for whites. Religion is not important in any group except for Hispanics, perhaps. It's 5th for whites. Class and gender are important. Sexuality ranks highest among blacks which supports the stereotype of blacks being more obsessed with sex than the rest of us (which is saying a lot).

The one thing that could unite us--American nationality--is one of the least important identities. It reaches its peak--4th--among whites. The future looks like identity politics.

The one type of identity that will probably be considered illegitimate by elites for the foreseeable future is whiteness. Every other interest group will push, but when whites qua whites push, they will likely be crushed by the powers that be. I could be wrong, but I don't see a time when elites will ever see whites as simply another normal interest group.

UPDATE: One problem with the question is that it seems to be designed to emphasize the kinds of identity that are closely linked with politics. While the sample is of young adults, some people will be married and have kids by their early thirties, but 'marriage' or 'parenthood' (or something like 'family' which can be important at any age) are not included. These identities are important to many people, and I suspect the popularity of gender might be linked in people's minds to family roles.

Also--since the question asks about identities that "have the most impact on your life." some liberals whites might be want to choose race since they feel their white privilege is so consequential. I'm thinking of a new Inductivist slogan: "The definition of white privilege (or Jewish or Asian privilege) is the accident of being part of a social network that has more people who have their shit together."
at December 21, 2019
Email ThisBlogThis!Share to TwitterShare to FacebookShare to Pinterest
Labels: Gender, Identity, Nationalism, Patriotism, Race, Religion, Sexual Orientation