Is IQ just a measure of social class?

A common claim by IQ skeptics is that the test simply measures social class.  If an IQ score is simply a proxy of social status, then the two variables should be very highly correlated. The statisticians tell us that a good proxy should correlate with the original variable at no less than 0.8.

An excellent example of a worthless proxy that is used all the time in social science research is opposition to racial preferences. It is used for whites as a proxy of racism.  The correlation between opposing preferences and feeling cool toward blacks is a whopping 0.1--a trivial relationship.

So what's the correlation between your class and IQ score?  I'll be generous to the skeptics and choose the measure of social class that correlates most strongly with intelligence; namely, father's educational level. Using the General Social Survey (GSS), I exclude immigrants since they are likely to have a disadvantage on the test (which is an English vocabulary quiz).  Here is a visual of the relationship (sample size = 20,533): 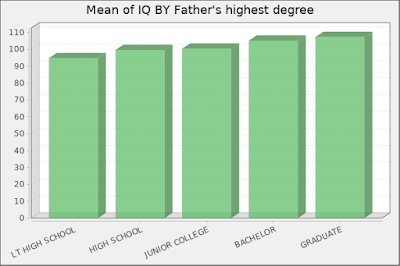 Sure, IQ rises with dad's highest degree earned, but the connection is not strong. To be specific, the correlation is only .27.

This is a typical problem for sociological explanations. In this instance, the privilege of one's class is supposed to determine one IQ's score. The mechanism should work in lockstep fashion with few exceptions, so the correlation should be almost perfect.  But in sociological research, most observed correlations are weak.  The world is much messier than the sociologist predicts.

The geneticist does not face this problem. Since each sibling is genetically unique (and there is also developmental noise), he expects lots of IQ diversity within a family. And that's exactly what we get: two randomly selected full siblings are expected to differ in IQ by 12 points. That's a lot.

The sociologist predicts siblings (at least same-sex siblings) will have the same IQs. That's way off.  Since parents and offspring differ genetically, the geneticist predicts only a modest link between social class and IQ, and that is exactly what we get.