Does IQ explain crime among blacks and Hispanics?

Criminological research usually finds that crime is most common among people with IQ's around 90.  Samples, however, are predominantly white.  Does the IQ finding hold for non-whites?

The General Social Survey (GSS) asks respondents (American adults) if they have ever been arrested, and it also gives a vocabulary quiz that can be used to measure IQ. 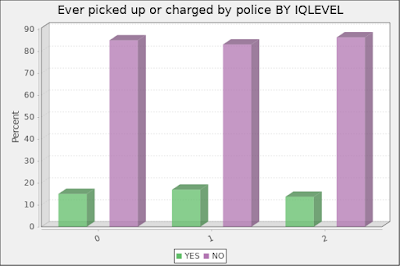 For whites, involvement in crime is highest among the low-medium group (16.9% arrested). This is what studies usually find. 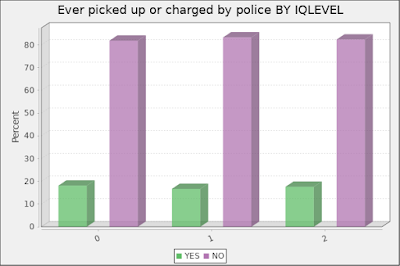 For blacks, roughly 17% of respondents at all IQ levels report having been arrested. (Keep in mind that blacks tend to under-report contact with police. I don't know if this tendency varies across IQ levels). 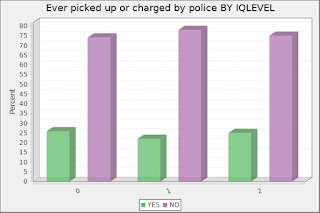 The low-medium IQ group has the lowest arrest rate among Hispanics.  Around 25% of the low and high groups report an arrest.

In sum, IQ helps explain crime among whites, but it does not predict crime like you'd expect among blacks and Latinos. Above-average individuals are at least as likely as the unintelligent to be involved in crime.