Pew Study: Jews are the most beloved religious group 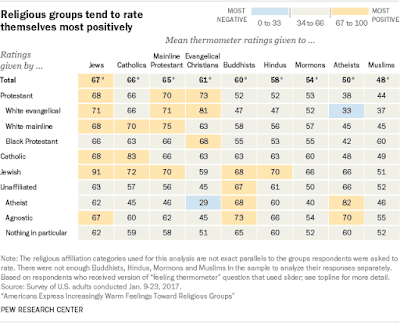 In the wake of the Pittsburgh shooting, the main number that jumps out me is that Jews are the most beloved of all groups (not counting warmth towards one's one group). People who dislike Jews are a tiny slice of American society.  Not surprisingly, Muslims are the least liked religion. Black Protestants like them best, probably because many American Muslims are black.

If you thought atheists were the enlightened lovers of humanity, you were wrong. The lowest mean on the graph is the feeling of atheists toward evangelical Christians. There is a good strong streak of hatred among "brights." Evangelicals don't like atheists either, but every educated person knows to expect this from Neanderthals. Atheists also have a strong dislike of Mormons. Every intelligent person knows Mormons are awful, awful people. Agnostic folks are clearly warmer people than atheists.

Jews give high numbers. My impression is that Jews do tend to have warm feelings toward others, or at least they express how one should feel. Who would have thought that one of the highest numbers on the graph (except numbers given for one's own group) is how Jews feel toward Catholics?
at November 02, 2018
Email ThisBlogThis!Share to TwitterShare to FacebookShare to Pinterest
Labels: Religion, Warmth