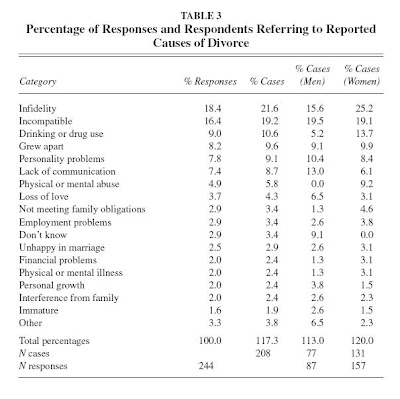 I got a chance to take a closer look at the research article Jason Malloy linked to to support the claim that the majority of cases of wife-initiated divorce are not due to husbands behaving badly. (Thanks to him for digging it up).

The problem is that people are asked what was caused the divorce, but they are not asked to whom they are referring. For example, a woman says that infidelity was the cause, but we don't know if she or her husband was the guilty party. Some of them seem more mutual, like "grew apart", but others are simply unclear. You can see all spontaneously mentioned causes in the table. (Notice how there isn't a single case of, "He turned into a wuss." Maybe it was put in "other.")

The authors do report the following correlations--wife respondent/infidelity .11, wife respondent/alcohol and drugs .13, husband repondent/communication .12, wife respondent/abuse .19, and husband respondent/don't know .24--but all this tells us is that one gender is slightly more likely than the other to report that specific cause. But once again, who did the bad thing is not specified, so we can't draw conclusions about about what percent of women-initiated divorces are caused by the husband's behavior. (You might also say that we can't decide this because women are not divided into initiators and non-initiators, but the other study used in this context shows that answers given by both groups of women generally do not differ significantly).

This leaves the 60% figure a shaky one, but let's see where it takes us. Current estimates put the lifetime probability of a marriage breaking up at just under 50%. According to the study I just mentioned, 69.5% of divorce cases are woman-initiated or the couple have made the decision mutually. If we mulitply .60 by .50 by .695, we get .209. So if you get married, there is a 21% chance that you're wife will leave you or the two of you will decide together to split up when you didn't do anything obviously wrong. Some readers are terrified by the prospect. The Spartans at Thermopylae had nothing on these guys. But I've got something from the study though that helps.

The researchers found that family-oriented people as well as those who place a lower value on self-realization are significantly less likely to initiate a divorce. The authors characterize these folks as "traditional." The take home message here is, lower the risk of divorce by marrying a traditional woman and by being a traditional man--just like several commenters and I have written.
at May 17, 2009
Email ThisBlogThis!Share to TwitterShare to FacebookShare to Pinterest
Labels: Divorce, Marriage