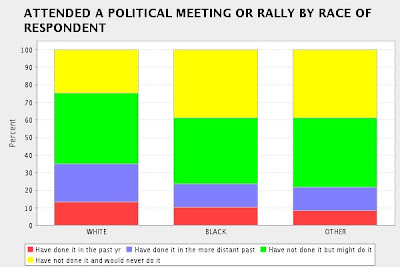 As a follow-up to my post about NAMs not attending tea party rallies, reader Robert Hume suggested I look at GSS data to see if politically active people in general are mostly white. The above graph shows that whites have disproportionately attended political meetings or rallies sometime in the past. At the same time, the differences are not huge: more than 20% of NAMs have participated at some time. (I looked at the variable HISPANIC and found that their numbers are the same as "other" shown above).

Garafalo claims that whites go to rallies because they're racists, but the racist protests are NAM rallies. The Million Man March was a manifestation of black solidarity. The illegal immigration protests were Latino solidarity. NAMs don't bother to show up unless the event is racist.