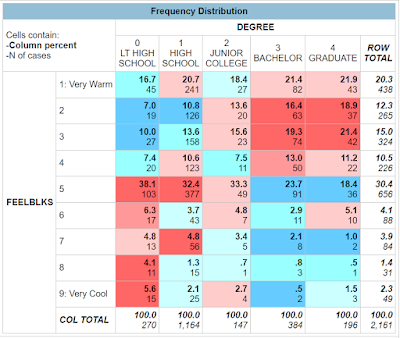 at October 11, 2020 No comments:
Email ThisBlogThis!Share to TwitterShare to FacebookShare to Pinterest

Using 2018 General Social Survey (GSS) data, I looked at the relationship between confidence in the existence of God and IQ as measured by a vocabulary quiz:

The IQ average for atheists is over 6 points higher than the mean for those who know God exists.  Agnostics, in fact, have the highest average with 103.9.

Now let's look at fertility by confidence in God for those who are old enough to have completed their family size but are not so old they're really from another generation. Let's choose 45 to 64:

We see that atheists average 1.2 children, while the mean for those who know God exists is 2.1. So believers have families that are 1.8 times bigger than those of atheists.  The believer/agnostic difference is similar.

We know that general intelligence is highly heritable, so smart people tend to have smart kids. Atheists and agnostics have fewer kids, so, at least under current conditions, skepticism is dysgenic.

The last post was incomplete because we were unable to see the percentages of whites who could be considered racist. The General Social Surv...