Recklessness among northern and southern whites 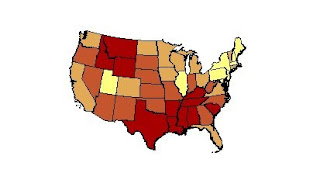 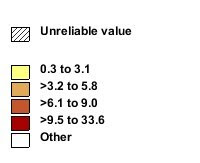 As a follow-up to the last post on racial differences in recklessness, I generated a map of fatal gun accident (FGA) rates by state. On many behaviors (e.g., violence, IQ, and education) southern whites seem to be between northern whites and non-Asian minorities (NAMs).

You can see from the map that the highest rates of FGAs among whites are concentrated in the non-coastal southern states. Idaho, Wyoming, and Montana--big hunting states--are the exceptions. According to the General Social Survey (GSS), the highest percentage of people who hunt are those who live in the mountain states.

High hunting rates might help explain the high FGA levels in the South, but people are just as likely to hunt in the north central region of the country (GSS), and their FGA rates are low.
at January 04, 2010
Email ThisBlogThis!Share to TwitterShare to FacebookShare to Pinterest
Labels: Northern vs. Southern Whites, Personality Differences