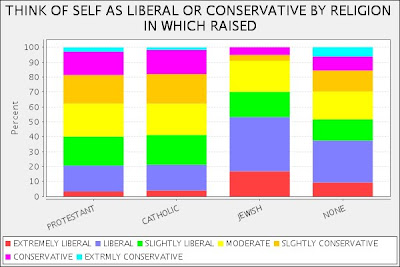 I'm currently reading Witness by Whittaker Chambers. He was an intelligent boy who grew up with no religion. Despairing over the world that was dying in the 1920s, he joined the Communist Party as a young man. Also despairing, his brother ended his life with his head in an oven.

These were sensitive boys, but it made me wonder if being smart and growing up with no religion is a risk factor for radical politics.

The graph shows current political orientation by religious affiliation when the respondent was age 16. I limited the analysis to whites and to those with a perfect score on a vocabulary test--a decent measure of IQ.

Those who were either Jewish or nothing as teens are more likely than Christians to be extremely liberal. (I'm afraid "communist" is not an option.)

(It's stunning that only 9 percent of smart people raised Jewish are slightly conservative, conservative, or extremely conserative.)

But notice how people growing up with no religion are also more likely than others to be extremely conservative. The difference is not statistically significant, but it is possible that being raised Christian has a moderating effect on one's politics.