A choice between two religions

It's my impression that most people need a psychological connection to something much bigger than themselves. A libertarian worldview will never become popular because few people are attracted to atomism and isolation. So it's simply a matter of which collective becomes important for a person. One possibility is to feel tied to all of humanity, but such a vast number seems too remote.

Family is an obvious community, but since it's been stripped to a bare minimum--a nuclear or single parent type--it doesn't offer the bigness that people crave.

Some people are attached to their local community, but American society is so mobile, many aren't able to grow deep roots in one place. Plus, our gigantic, sprawling cities are not conducive to a sense of community. A large number of ethnic and racial minorities turn to their tribe for meaning, but that's not a respectable option for the majority.

It looks like the main options white folks have is either God or the State. Of course, a person could love Americans without loving the government, but many citizens seem to conflate the two. Empirically, there is something of a choice between two types of religion: the traditional type and the modern one with the Holy Trinity of Roosevelt, Kennedy, and King. (One has got to go to make room for Obama--I put my money on the dusty old white guy).

This table based on GSS data shows some support for this idea: 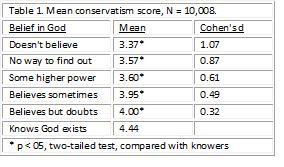 It shows that atheists are more than one standard deviation more liberal than Americans who say they know God exists. (Cohen's d is the difference between means as a propoertion of a standard deviation). That is a huge gap.

It looks like there is a tendency to substitute one form of bigness or crusade for another. Christians want to save souls; atheists want to save the planet.

You can see the same pattern with level of religious involvement (measured as church attendance):

Religious people tend to see government as the problem, not the solution, while the irreligious place their faith in it. Of course, there are exceptions: liberal Christians, for example. But there is a tendency among Americans today to place their deepest hopes in either a church or Washington. If we want a more conservative country, we need a more religious one.
at January 01, 2010
Email ThisBlogThis!Share to TwitterShare to FacebookShare to Pinterest
Labels: Political Orientation, Religiosity